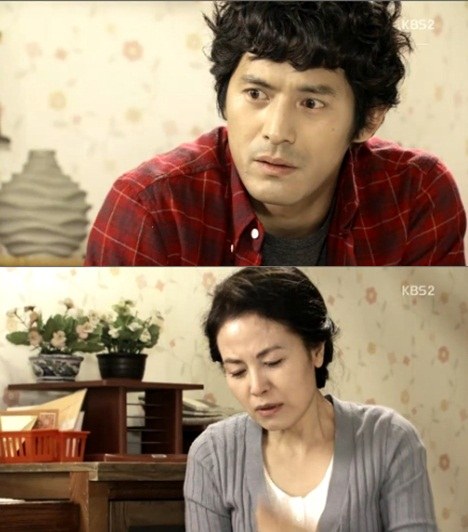 The fifteenth episode of the KBS 2TV drama "The Queen of Office" showed Jang Gyu-jik (Oh Ji-ho) and Moo Jeong-han (Lee Hee-joon) having a drink and asking about Miss Kim (Kim Hye-soo).

Jeong-han said, "I don't know why she only wears pants" and then he told Gyu-jik, "She hurt her leg in a fire at the Daehan Bank".

Gyu-jik went back home and looked for the pictures of his father's old bank and found Miss Kim there.

Gyu-jik's past was then viewed. His father was always scolding his mother about the strike she was on and Gyu-jik used to comfort her. She was Miss Kim's superior.

Gyu-jik visited his mother at the cemetery on the day of her death and told Miss Kim who his mother was.

"[Spoiler] Kim Hye-soo's dead superior is Oh Ji-ho's mother"
by HanCinema is licensed under a Creative Commons Attribution-Share Alike 3.0 Unported License.
Based on a work from this source