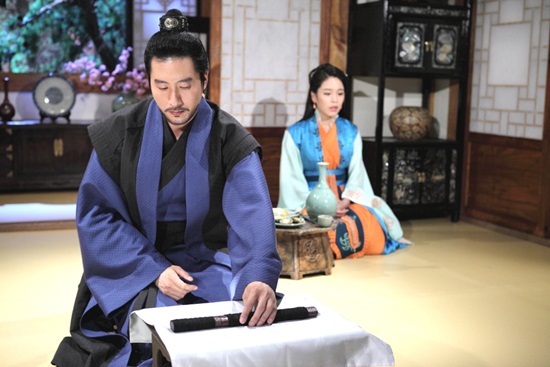 No one's life can be guaranteed in the MBC weekend drama "God of War" these days. On the thirty-ninth episode, Kim Joon (Kim Joo-hyuk) who was digging through Kim Yak-seon's (Lee Joo-hyun) conspiracy, decided to kill himself .

On the previous episode, it seemed the conspiracy was come to a conclusion with the death of the mastermind Kim Yak-seon but as Park Seung-seon's (Choi Woon-gyo) protection seizure conspiracy became full-fledged, everything was at risk of being uncovered.

Choi Woo (Jung Bo-suk) has to pull a knife on his son-in-law and his obsessed daughter Song-ee (Kim Gyu-ri) who has given up everything for the man she loves. Kim Joon finds Ahn-sim (Hong Ah-reum) at last to put a stop to his complicated destiny.

There is a great war for authority. Kim Joon, Ahn-sim, Song-ee and Choi-woo's dissolution is about to start.

"God of War" is shown every Saturday and Sunday at 8:40PM.

"[Spoiler] Kim Joo-hyuk decides to commit suicide with Hong Ah-reum"
by HanCinema is licensed under a Creative Commons Attribution-Share Alike 3.0 Unported License.
Based on a work from this source