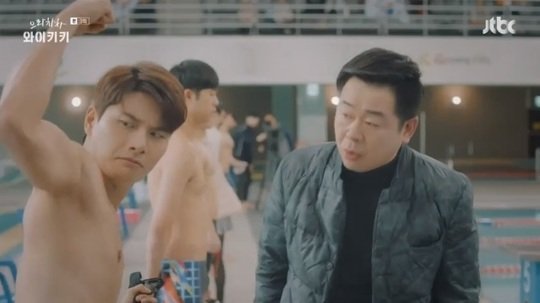 On the latest episode of the JTBC drama "Laughter in Waikiki", Lee Joon-ki (Lee Yi-kyung) waxed his armpit hair.

His luxurious body hair was pointed out in an audition and he attempted at Brazilian waxing for the first time. The director had told him the role he was auditioning for was a swimming athlete and that athletes shaved their armpits and all over their bodies. Lee Joon-Ki said, "I can do it. I'll shave every bit of my body except my hair.

He had himself waxed by his new girlfriend Ji-soo's sister and made a fool of himself. Then he accidentally spilled hot ramen soup on his lap and embarrassed himself twice. This time, Ji-soo's mother, a doctor, treated him. Ji-soo eventually broke up with him because he had shown his naked self to her sister and mother.

However, the swimming athlete role fell through because the main character refused to wax himself and Joon-ki, who looked too clean, was now part of the cheering team. He cheered fully clothed.

"[Spoiler] "Laughter in Waikiki" Lee Yi-kyung Has Humorous Body Hair Mishaps"
by HanCinema is licensed under a Creative Commons Attribution-Share Alike 3.0 Unported License.
Based on a work from this source