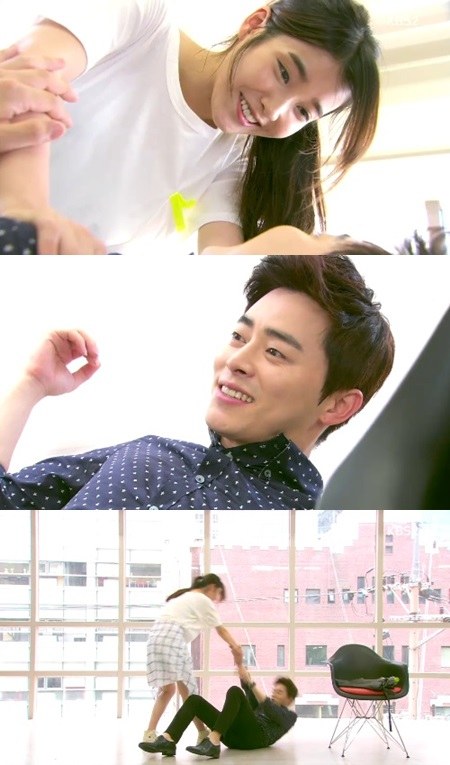 "Lee Soon-shin" Jo Jeong-seong and IU fell down and touched each other.

On the thirty-fourth episode of the KBS 2TV drama "Lee Soon-sin is the Best", Sin Joon-ho (Jo Jung-suk) and Lee Soon-shin (IU) had a moment of 'touching' each other.

Lee Soon-shin failed the audition she participated in with Jo Jung-suk. She was deeply upset about it and Sin Joon-ho said, "I once went on stage with the thought of justifying myself with my dad and failed. It's the hardest to let everything in your heart go. Let's try again tomorrow".

He looked through auditions for drama but then focused on auditions for singers. He thought of her singing at the theater before and suggested to Soon-shin about it. The judges were optimistic about her and said, "You have a good voice and there's a possibility".

Lee Soon-shin concentrated on her dancing and Sin Joon-ho told her, "You shouldn't dance. I should know". She laughed at him and teased him so he showed off in front of her but fell down with her. This is when they 'touched' each other unexpectedly.

"[Spoiler] "Lee Soon-sin is the Best" Jo Jung-suk and IU touch again"
by HanCinema is licensed under a Creative Commons Attribution-Share Alike 3.0 Unported License.
Based on a work from this source