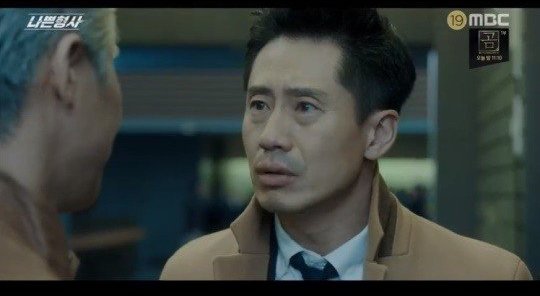 Hwang Suk-jung was arrested for murder on the latest episode of the MBC drama "Less Than Evil".

Chief Seo said, "Eun Hong-goo used to work at the factory and I am the one who sent the murder weapon. I killed him, did you get the hammer?"

Woo Tae-suk asked why he did it and Chief Seo answered, "The man worked at a sink factory for 20 years. He claimed bankruptcy and next he embezzled and asked me to be a puppet boss".

"I was diagnosed terminally ill a while ago. I yelled at him and told him to give me my money before he died and then I decided to kill him".

Woo Tae-suk asked how he killed them and he explained the process.

Jun Choon-man said, "The woman who went on strike because of her son's death killed the director. She was sent back but she ended up killing. Anyone who gets involved with you always has a bad ending".

Previously, Hwang Boo-kyung had gone to meet Lee Soo-han regarding her dead son and Lee Soo-han fell to his death after meeting her.

Hwang Boo-kyung was arrested for murder and asked for Woo Tae-suk.

Woo Tae-suk asked her for the truth and she said, "If I talk then you won't investigate my son's death. Find out the truth about that and I'll tell you the truth".

The police went to Seo Jae-geun's house and Eun Sun-jae went to the office.

Eun Sun-jae resigned and went home to pack her things.

"[Spoiler] "Less Than Evil" Hwang Suk-jung arrested for murder "
by HanCinema is licensed under a Creative Commons Attribution-Share Alike 3.0 Unported License.
Based on a work from this source