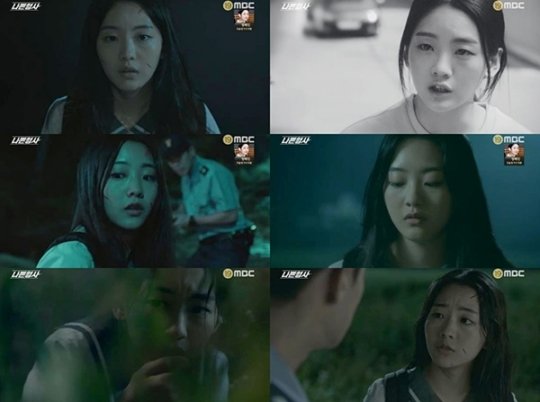 Cho Yi-hyun is a character that had absolute influence on Shin Ha-kyun.

Cho Yi-hyun takes on the role of Bae Yeo-wool, a murder witness in the new MBC drama "Less Than Evil".

In the first episode on the 3rd of December, Cho Yi-hyun collaborated with Shin Ha-kyun who plays a policeman named Woo Tae-seok.

In the beginning, she appeared as a mysterious teenager and said, "I know where Soo-ah is".

She pointed to a patch of grass.

When they approached a cliff, she said she'd jump if he came closer and she really did. Her life was spared, but a knife was found in her backpack. She didn't get along with Tae-seok who was trying to induce a testimony from her.

Then a murder occurred in Bae Yeo-wool's house. Her family was sacrificed and Yeo-wool was nowhere to be found.

This case bothers Shin Ha-kyun for the next 13 years.

Meanwhile, Cho Yi-hyun is a talented rookie who signed in with JYP Entertainment in October last year.

She debuted in 2017 with the web-drama "Revenge Note" and appeared in "Witch's Court" as well as a couple music videos.

She recently starred in the MBC drama "Bad Papa".

"[Spoiler] "Less Than Evil" Cho Yi-hyun's Strong First Impression"
by HanCinema is licensed under a Creative Commons Attribution-Share Alike 3.0 Unported License.
Based on a work from this source