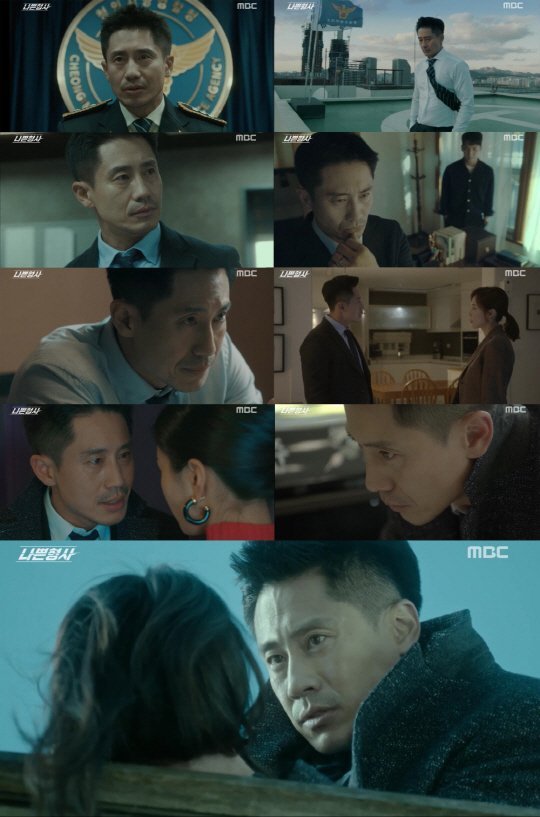 On the latest episodes of "Less Than Evil", Woo Tae-seok (Shin Ha-kyun) submitted his resignation after committing illegal actions to catch Jang Hyeong-min (Kim Gun-woo), but his superiors made him chief of the S&S (Serious and Serial) team.

The first case for the S&S team was the murder of a middle aged couple and Woo Tae-seok met Eun Seon-jae (Lee Seol) once again as she was the daughter of the victims. He felt something strange about her. She was a psychopath who didn't feel anything about her parents' death. Woo Tae-seok knew she was the culprit and started looking into her, setting up a conflict composition. Tae-seok used her adoption and she used the relationship with his wife and Hae Joon (Hong Eun-hee) to provoke one another.

Along the way, it turned out Seon-jae had hidden the hammer that she used as a murder weapon in her dog's body and cremated him. Tae-seok spilled the remains of her dog in front of her, but amongst the remains was not the hammer, but Bae Yeo-wool's (Jo Yi-hyun) nametag. Why did traces of Bae Yeo-wool (the source of Woo Tae-seok's trauma and bad detective behavior as he couldn't protect her), leak from Eun Seon-jae?

Shin Ha-kyun became a cold and bad detective in the process of conflicting with Lee Seol. However, he was very warm and humane when he tried to protect Bae Yeo-wool and protect his team after Jang Hyeong-min's accident.

"[Spoiler] "Less Than Evil" Shin Ha-kyun Is a Mix of Fire and Ice"
by HanCinema is licensed under a Creative Commons Attribution-Share Alike 3.0 Unported License.
Based on a work from this source