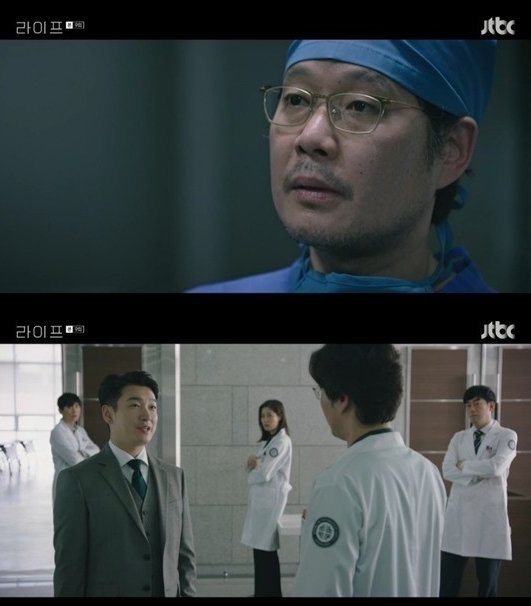 On the latest episode of the JTBC drama "Life", Ye Jin-woo (Lee Dong-wook) nominated Joo Kyeong-moon (Yoo Jae-myung) as the director of the hospital.

Ye Seon-woo (Lee Kyu-hyung) told Lee Noh-eul (Won Jin-ah) that he had a crush on her, but was rebuffed. Goo Seung-hyo (Cho Seung-woo) was worried about the image of the hospital and told Ye Seon-woo to fire Kim Tae-sang (Moon Sung-keun).

Ye Sun-woo asked for a change in the hospital culture and started an argument in front of Kim Tae-sang, Lee Sang-yeop (Uhm Hyo-sup), and Oh Se-hwa (Moon So-ri). Ye Jiin-woo then asked Joo Kyung-moon to become the director of the hospital.

Meanwhile, the emergency room nurse reported the different system in hospital management because of Goo Seung-hyo to Ye Seon-woo, and Joo Kyung-moon declared he would run for candidacy with the plan he had made in Kimhae.

"[Spoiler] "Life" Lee Dong-wook Nominates Yoo Jae-myung for Hospital Director"
by HanCinema is licensed under a Creative Commons Attribution-Share Alike 3.0 Unported License.
Based on a work from this source