Bong-pil met Kang Soo-jin (UEE) at the beach when they were 22 years old on the latest episode of the KBS 2TV drama "Man-Hole".

Bong-pil was working on the beach. Kang Soo-jin and friends came to see him but Bong-pil told them to go back to Seoul. 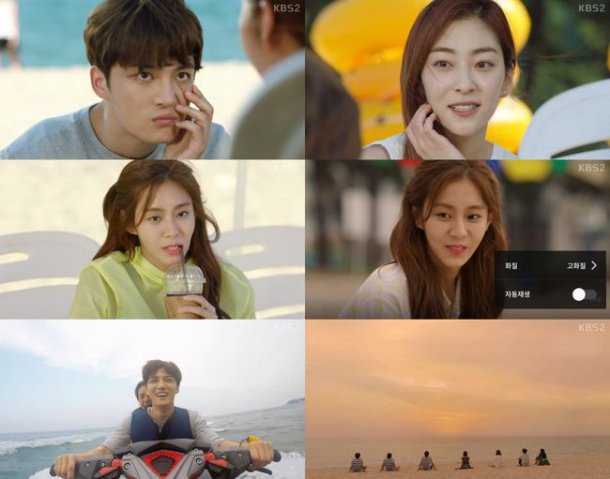 Wang Ji-won was friendly with all of Bong-pil's friends. She said, "I drank with Bong-pil last night. He's a lightweight".

Kang Soo-jin met someone else too. That was the boyfriend in Bong-pil's mind. Bong-pil brought Kang Soo-jin out and went on a date.

However, they couldn't tell each other how they felt. A fire happened while Kang Soo-jin fell asleep.

Bong-pil saved Kang Soo-jin. He told her, "I will always save you no matter what happens to you". Kang Soo-jin heard this and was going to kiss him.

Just then, the time-slip ended and Bong-pil returned to 2017 in a suit.

"[Spoiler] "Man-Hole" Kim Jae-joong saves UEE but kiss falls through "
by HanCinema is licensed under a Creative Commons Attribution-Share Alike 3.0 Unported License.
Based on a work from this source