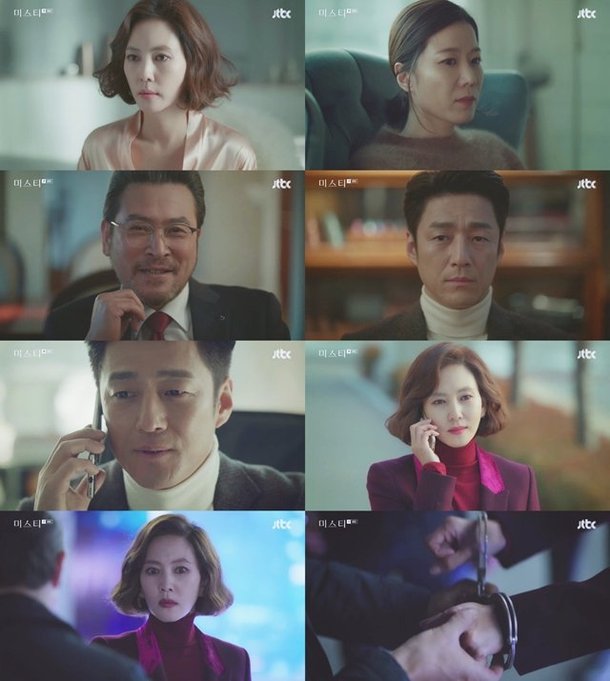 On the latest episode of the JTBC drama "Misty", Ko Hye-ran (Kim Nam-joo) was unofficially nominated as the spokesperson of the Blue House, but she was arrested for the murder of Kevin Lee (Go Joon) in the newsroom. Her career was just about to take off, but the incident made her plummet.

The Kevin Lee case was sent for prosecution. Byun Woo-hyun (Kim Hyung-jong), who had been defeated by Kang Tae-wook (Ji Jin-hee) on the foreign laborer case, wanted revenge to restore his reputation. However, things didn't work out the way he wanted. Kang In-han (Nam Kyung-eup), the CEO of Kang Yool law firms and a member of the Gold Moon club where tone of the law enforcement agencies and the media were set, promised Tae-wook that he had his back.

Despite controversy, Ko Hye-ran told the secretary of the Blue House that she will take care of "News 9" within the week and make sure no rumors got out. Despite Jang Gook-jang's (Lee Kyung-young) resistance, she chose Han Ji-won's (Jin Ki-joo) item and called out on all the construction irregularities.

As soon as Ko Hye-ran's news began, Woo-hyun was given Kevin Lee's case. Kang Ki-joon (Ahn Nae-sang) appeared in the middle of a news room party and arrested Ko Hye-ran for the murder of Kevin Lee. Jang Gook-jang had told her she would get hurt on the way up but Ko Hye-ran said, "This may be my last news".

Tae-wook took a sneak peek at Ko Hye-ran's black box in Eun-joo's house. Suh Eun-joo (Jeon Hye-jin-II) stated that Kevin Lee got in an accident on his way to meet Ko Hye-ran after he got a call from her.

"[Spoiler] "Misty" Kim Nam-joo Arrested for Murder"
by HanCinema is licensed under a Creative Commons Attribution-Share Alike 3.0 Unported License.
Based on a work from this source