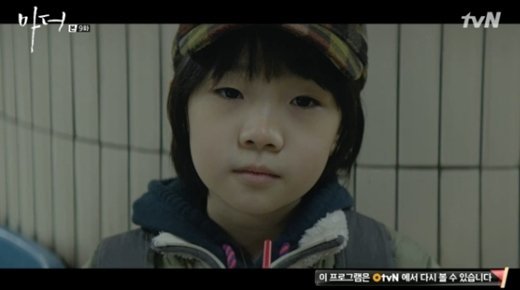 On the latest episode of the tvN drama "Mother - Drama", Soo-jin, Hye-na, and Ja-young (Ko Sung-hee) talked to each other.

Ja-young tapped on the cabinet that Hye-na was hiding in and said, "Mommy's sorry. I'll do better". Hye-na replied, "My name is Yoon-bok and I live with my mother in my grandmother's house. We are leaving far away".

Ja-young gave up and turned around. Soo-jin promised to do her best. Ja-young returned home but Sul-ak (Sukku Son) appeared at Young-sin's (Lee Hye-young-I) house where Hye-na and Soo-jin lived.

Young-sin found out everything and said, "If Soo-jin chooses to go a dangerous road, then I have no choice, but to remove her from my family".

Soo-jin cried and Young-sin added in disappointement, "In dangerous situations all you wanted from me was money".

Hye-na didn't want Soo-jin to be disowned. Hye-na decided to leave. While Soo-jin was sleeping, Hye-na packed her bags and said to herself, "I liked being Yoon-bok. I love you, mother, to the skies and back. I already miss you".

In the preview of the next episode, Soo-jin says, "If Yoon-bok is going back to her mother who abandoned her, then I have no right to be a mother". Young-sin says, "I made my daughter cry. I drove her out". Threatening that they will let the world know the kidnapper was actress Cha Young-sin's daughter, the police goes to see Soo-jin. They try to convince her that surrendering is the only way. Then Hye-na ran into Sul-ak (Sukku Son).

"[Spoiler] "Mother - Drama" Heo Yool Leaves to Protect Lee Bo-young"
by HanCinema is licensed under a Creative Commons Attribution-Share Alike 3.0 Unported License.
Based on a work from this source