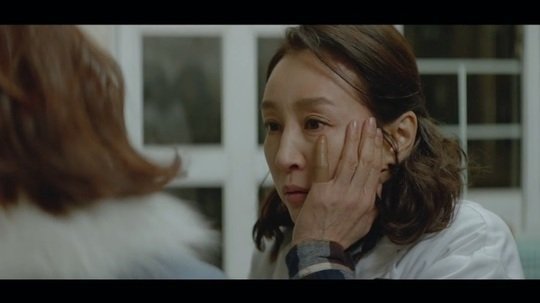 Yeong-sin smelled something fishy about her daughter Lee Jin (Jeon Hye-jin) and forced the truth out of Hyeon-jin (Go Bo-gyeol). Hyeon-jin mistook Hye-na (Heo Yool), who saved her from an accident, as Soo-jin's daughter.

Yeong-sin was outraged at the thought that Soo-jin had a daughter and didn't tell her. She headed to the barber's that night. Soo-jin, Hye-na, and Hong-hee were there and Hye-na was hugging Hong-hee with affection. Seeing this, Yeong-sin was sure that Hong-hee was Soo-jin's mother.

Yeong-sin appeared in front of them and slapped Hong-hee said, "Are you the woman that abandoned my daughter?"

"[Spoiler] "Mother - Drama" Lee Hye-young-I slaps Nam Gi-ae"
by HanCinema is licensed under a Creative Commons Attribution-Share Alike 3.0 Unported License.
Based on a work from this source