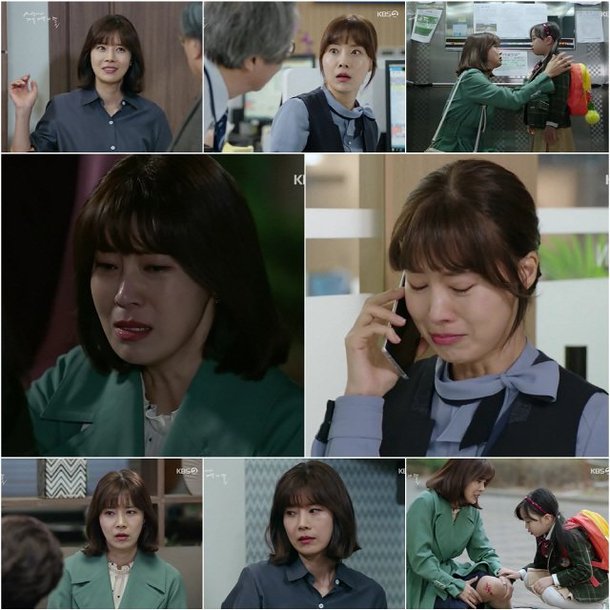 The KBS weekend drama "Mother of Mine" actress Yoo Sun and her tears moved viewers.

Yoo Sun plays the role of Kang Mi-seon, a working mom who struggles to balance housework, childcare, and a difficult job. On the third and fourth episodes of "Mother of Mine" on the 24th, Yoo Sun broke down when her own mother Park Seon-ja (Kim Hae-sook) who was helping her with the weight on her shoulder, was insulted by her mother-in-law Ha Mi-ok (Park Jung-soo).

Kang Mi-seon had asked her mother for help in preparing her mother-in-law's special dinner to celebrate her 'hole-in-one' with her friends. Park Sun-ja offered to make the dish her in-law asked for and also offered to bring her granddaughter Da-bin (Joo Ye-rim) home from school. However, Kang Mi-seon's superior heard Kang Mi-seon on the phone and started picking on her. As a result, the whole team laughed at her and Kang Mi-seon had a terrible day at school.

Kang Mi-seon headed straight for her mother-in-law's house to cook dinner as ordered. Her mother Park Seon-ja came soon after and handed her the food she'd prepared and dropped off Da-bin. When Ha Mi-ok's friends were impressed that Park Seon-ja even made Kimchi for Ha Mi-ok, she said making kimchi was no big deal compared to herself giving her her well-off son for a son-in-law.

The next day, despite Kang Mi-seon's struggles, mother-in-law Ha Mi-ok scolded her for her actions and Kang Mi-seon apologized. Just then, Park Seon-ja came running home with Da-bin in her arms because she'd fallen from the swing. Ha Mi-ok yelled at Park Seon-ja for not keeping an eye on the child and Kang Mi-seon started crying tears of anger and regret for her mother. However, started yelling at her mom saying, "What's wrong with you mom? Why can't you keep an eye on her!"

Mi-seon makes sure she doesn't become a burden to others, but she suffers at work trying to get in the good eyes of her superior and her teammates and gets picked on by her mother-in-law all the time. With the cold reality of working mom, she cried over the phone, apologizing to her mother for not being able to thank her when she went all out to help. Yoo Sun poured her heart out because she was so upset that her mother-in-law didn't just snub her, but also her mother who bowed her head apologetically to her in-law. Yoo Sun's act related with the thousands of working moms all over the country.

Meanwhile, "Mother of Mine" is shown every Saturday and Sunday at 7:55 PM KST.

"[Spoiler] "Mother of Mine" Yoo Sun Highlights the Struggles of a Working Mother "
by HanCinema is licensed under a Creative Commons Attribution-Share Alike 3.0 Unported License.
Based on a work from this source