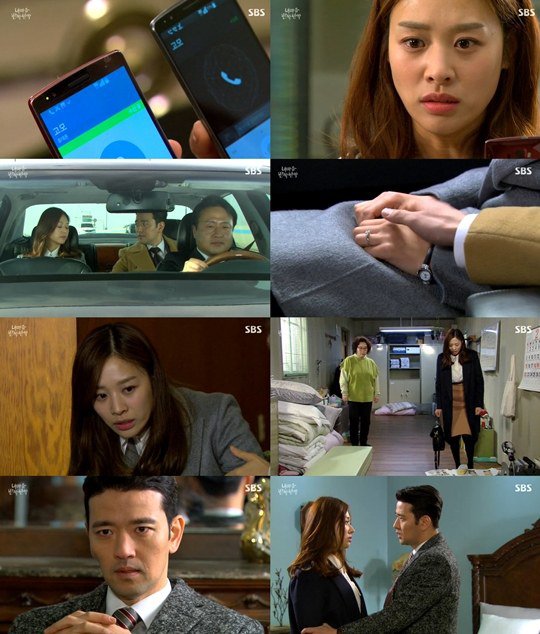 Jang Shin-young got angry at her husband, Bae Soo-bin for hiding the whereabouts of her younger sister Nam Bo-ra.

On the fourteenth episode of the SBS weekend drama "My Heart Shines", Lee Soon-jin (Jang Shin-young) found out about Cheon Woon-tak (Bae Soo-bin) and what he did.

She was cleaning his room when she got a phone call from her aunt Lee Mal-sook (Yoon Mi-ra) and felt something wasn't right. Cheon Wook-tak's phone on the desk was ringing at the same time.

Lee Soon-jin shakily picked up Cheon Woon-tak's phone and heard herself on her husband's phone. He'd been tapping the phone all this time and Lee Soon-jin was in shock.

Lee Soon-jin went to a couple's dinner with Cheon Woon-tak and learned that he knew where her younger sister Lee Soon-jeong (Nam Bo-ra) was. Lee Soon-jin was so shocked that her own husband didn't tell her about this and fainted.

Without her husband knowing, Lee Soon-jin went to the place where Lee Soon-jeong used to work. She found her there and also found out that she'd been there for 3 years, living in a container box.

Just then, her husband called and anxiously asked where she was. She told him she was out and that she'd be home soon.

When Lee Soon-jin returned to the hotel, Cheon Woon-tak asked where she'd been and she replied in a cold voice, "You really want to know?"

It looks like the relationship between the two people might be unreversable now that she found out he'd been keeping tabs on her and hiding her sister's whereabouts.

"[Spoiler] "My Heart Shines" Jang Shin-young gets angry at husband Bae Soo-bin"
by HanCinema is licensed under a Creative Commons Attribution-Share Alike 3.0 Unported License.
Based on a work from this source