[Spoiler] "My princess" up "Sign" down Kim Tae-hee and Song Seung-heon kiss worked! 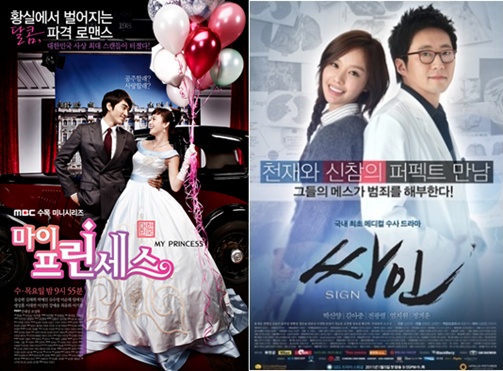 "My Princess" on this day drew attention as Song Seung-heon and Kim Tae-hee's sad romance was emphasized. Having misunderstood that her father died because of Hae-young's (Song Seung-heon) father, Lee Seol (Kim Tae-hee) discovers the truth about her father's death and decided to give him up. She tried so hard to ignore Hae-young at the doorstep of her pension, where she returned to after declaring she won't be princess. But she finally opened the door to a crying Hae-young who was confessing his love for her and they kissed.

Viewers' hearts shook as their romance hit the climax. As the ratings for "Sign" dropped the gap between first and second place between the two dramas are getting closer.

"[Spoiler] "My princess" up "Sign" down Kim Tae-hee and Song Seung-heon kiss worked!"
by HanCinema is licensed under a Creative Commons Attribution-Share Alike 3.0 Unported License.
Based on a work from this source