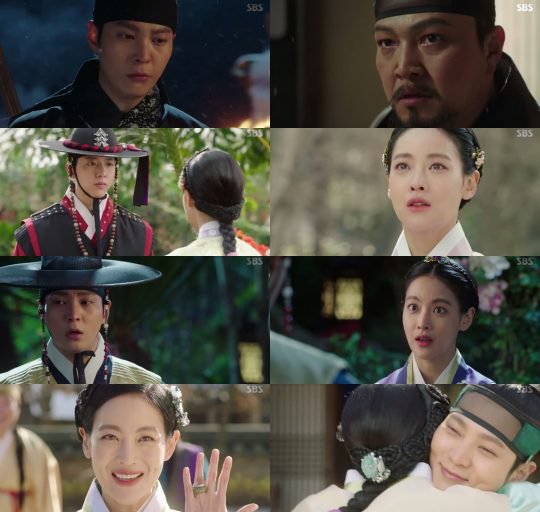 Gyeon Woo (Joo Won) and Princess Hye Myeong (Oh Yeon-seo) promised to get married on the final episode of the SBS drama "My Sassy Girl - Drama".

Jeong Ki-joon (Jung Woong-in) a tyrant who was mad for greed, was finally killed by Gyeon Woo. He confessed to killing General Choo Seong, Min Yoo-hwan and even the queen. He had started provoking Hwi Jong (Son Chang-min) when Gyeon Woo killed him. Choo Seong's brother General Eun Seong barely saved his life.

Everything seemed to be taking its own place, but not for Gyeon Woo and Hye Myeong. He couldn't go back to her because he felt bad. Gyeon Woo chose to leave to Jeonju and Kang Jong (Lee Jung-shin) was upset he could do anything to help them.

Kang Jong told Hye Myeong that Gyeon Woo was leaving. Gyeon Woo stopped by at a place where he had good times with Hye Myeong and headed for the bridge they first met. Hye Myeong headed there as soon as she heard he was leaving.

When they met, Hye Myeong said, "I haven't forgiven you yet. You are a bad guy. I Can't Live without You. I am not happy without you". Gyeon Woo embraced her.

It looked like they were going to get married but something got in their way. Hye Myeong claimed she wanted to study in the Qing Dynasty. Gyeon Woo was about to propose.

However, he couldn't stop her and helped her go to the Qing Dynasty.

When she returned, she asked Gyeon Woo to marry her.

"Falsify" is coming up next.

"[Spoiler] "My Sassy Girl - Drama" Joo Won and Oh Yeon-seo at the start of happiness"
by HanCinema is licensed under a Creative Commons Attribution-Share Alike 3.0 Unported License.
Based on a work from this source