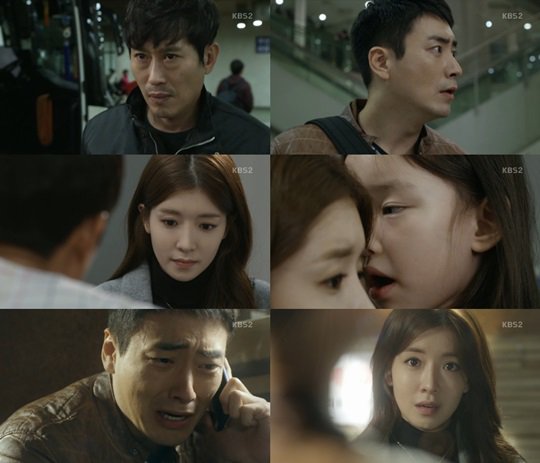 Jung In-sun found Lee Joo-hyeok who was appointed a criminal.

On the third episode of the KBS 2TV drama "Naked Fireman", Kang Cheol-soo (Lee Joon-hyuk) was framed for arson 10 years ago.

Kwon Jeong-nam (Jo Hee-bong) was the real culprit but he hid his weapon in Oh Seong-jin's (Park Hoon) house. Han Jin-ah (Jung In-sun) didn't know a thing and she asked Jeong-nam for help.

Jin-ah found out Oh Seong-jin and Han Song-ja (Seo Jeong-yeon) were the ones who snuck away the painting and checked out Oh Seong-jin's face. Jin-ah realized Oh Seong-jin wasn't the man she thought he was but took him for the arsonist and Kwon Jeong-nam planned to have him framed.

Kwon Jeong-nam carried a knife in his pocket and followed Kang Cheol-soo (Lee Joon-hyuk). Jeong-nam found Cheol-soo at the terminal and threatened Cheol-soo who had his in the bathroom after an unexpected call.

When Jeong-nam thought Cheol-soo had recognized him who had been hiding in Oh Seong-jin's house, he started hitting his head on the wall. Jeong-nam took out a gun and said, "You hit a cop and threatened him with a gun. Why did you do that?"

Cheol-soo shot perfume in Cheol-soo's eyes and ran but he was "Wanted" for police assault and arson 10 years ago. Kang Cheol-soo started running away without even knowing why he was on the run. He tried to explain but even his friend Oh Seong-jin didn't believe him.

Cheol-soo found out what really went on through Oh Seong-jin but he still hid himself to clear his name. Jin-ah found him.

"[Spoiler] "Naked Fireman" Jung In-sun finds Lee Joon-hyuk "
by HanCinema is licensed under a Creative Commons Attribution-Share Alike 3.0 Unported License.
Based on a work from this source