[Spoiler] 'Neighborhood Hero' Lee Soo-hyuk transforms into an ordinary young man, who's generous to a fault 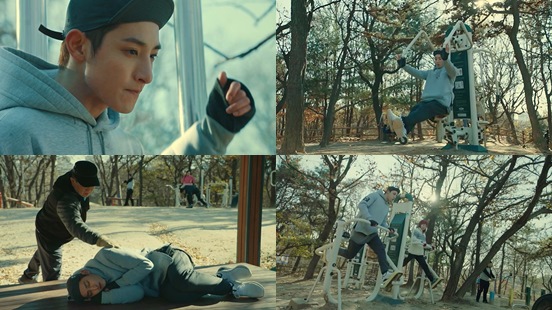 Lee Soo-hyuk is starring as Choi Chan-gyu, an ordinary young man in neighborhood, who is generous to a fault, in OCN's weekend drama, "Neighborhood Hero". He is drawing attention from drama fans by presenting a pitiful side of a youth.

On the 7th episode of "Neighborhood Hero", which will be broadcast on February 20th, Lee Soo-hyuk visits a park in the nearby mountain of his neighborhood to do some exercises. As he was determined to become a shadow in the previous episode, he will now take an action to fullfil his determination by doing exercises. The way he exercises along with his neighbors in the park looks familiar.

In the previous episode, he went out to exercise early in the morning after he was impressed with Baek Si-yoon (Park Si-hoo)'s brave acts defeating the villains. However he ended up lying down on a bench in the park completely exhausted.

In the upcoming episode, he will fall into an unexpected dangerous situation and will seek for some help to save his life. It seems that his deep soft eyes looking for help will steal the hearts of lady drama fans.

"Neighborhood Hero" is broadcast at 11 PM every Saturday and Sunday.

"[Spoiler] 'Neighborhood Hero' Lee Soo-hyuk transforms into an ordinary young man, who's generous to a fault"
by HanCinema is licensed under a Creative Commons Attribution-Share Alike 3.0 Unported License.
Based on a work from this source