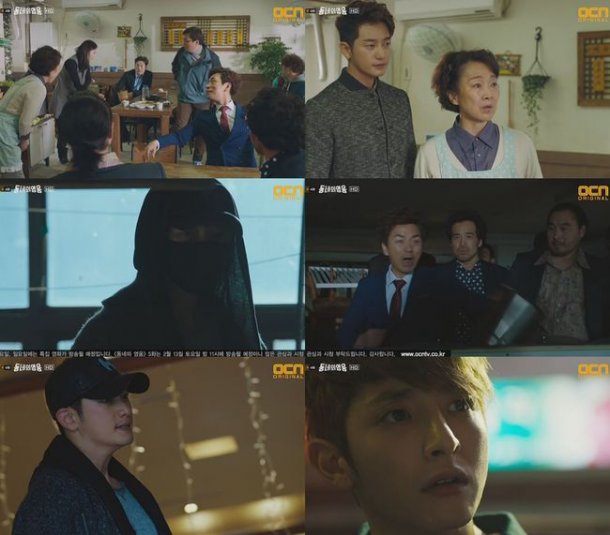 On the 4th episode of the OCN drama "Neighborhood Hero", Mr. Hwang suggested to Si-yoon to become a 'shadow'. Hwang sends Si-yoon to an old friend's house. Si-yoon sees the friend's mother mourning over the friend's death and feels his heart aching. He returns to Hwang and asks why he sent him there.

Hwang tells him to stop his revenge but Si-yoon says, "Looking at his mother made me want to take revenge even more". Then Hwang asks Si-yoon to become a 'shadow' and Si-yoon worries that he doesn't like following people.

The mother is in a bad situation as Sang-min wants to build a shopping mall in the spot where she runs a restaurant. Sang-min orders gangsters to interrupt her business and Si-yoon, who saw this, tells her to call him when there's a problem. She calls him when the men come again.

Si-yoon wears a mask to the gangsters' hideout and gets in a physical brawl with the men. He defeats them all and takes off his mask. Chan-gyu, who wants to be a shadow too, sees this and is in shock

"Neighborhood Hero" is about a secret agent wanting to reveal the secret to his friend's death and rounding up a poor pre-university student and a corrupt policeman to help the those who need it.

"[Spoiler] "Neighborhood Hero" Park Si-hoo becomes a shadow"
by HanCinema is licensed under a Creative Commons Attribution-Share Alike 3.0 Unported License.
Based on a work from this source