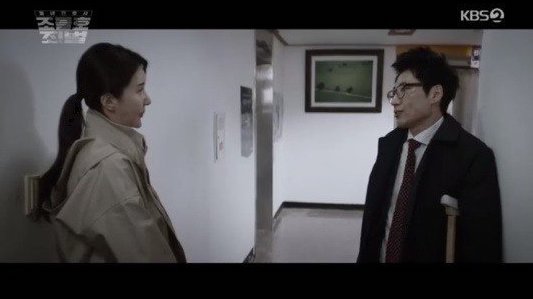 On the latest episode of the KBS 2TV drama "Neighborhood Lawyer Jo Deul-ho 2: Crime and Punishment", Jo Deul-ho (Park Shin-yang) ended up in a jail. The CCTV did not record the entirety of the events invovling a pregnant victim who miscarried. The victim defrauded a case Jo Deul-ho was investigating. The woman stated that Jo Deul-ho remembered who she was, lied that she heard rumors that he was going to deprive him of his prosecution rights, and stabbed her.

Gook Jong-seop (Kwon Hyuk), Gook Jong-hee (Jang Ha-ran) and Gook Jong-bok (Jung Joon-won) suspected the person behind this to be Lee Ja-kyung (Go Hyun-jung) and schemed to have a card ready for in case this event took a turn.

"[Spoiler] "Neighborhood Lawyer Jo Deul-ho 2: Crime and Punishment" Park Shin-yangs Falls for Go Hyun-jung's Trap "
by HanCinema is licensed under a Creative Commons Attribution-Share Alike 3.0 Unported License.
Based on a work from this source