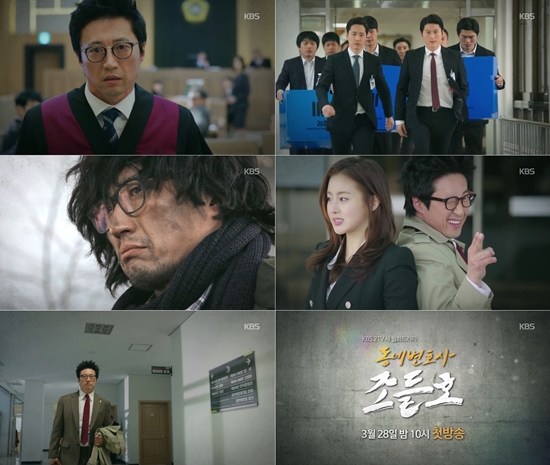 On the second episode of KBS 2TV's Monday & Tuesday drama, 'Neighborhood Lawyer Jo Deul-ho' Jo Deul-ho (Park Shin-yang) became in charge of a defendant of an arson-murder case that had happened three years ago.

Jo Deul-ho went to see the defendant and told him, "You should become a witness" and gave him the keywords, "I saw a car. A man in his 20s". He told the defendant to memorize the words. Lee Eun-jo (Kang So-ra) yelled, "What are you doing" and tried to stop Jo Deul-ho. However, he still asked the defendant to follow his instruction. The defendant in the court could remember what he had witnessed actually at the time. He testified, "His physique was lean and looked cool. I thought what brought a person like him to a place like this".

Based on what he said, Jo Deul-ho claimed that the defendant was not the criminal and submitted the tire traces to the court as the evidences.

Sin Ji-wook (Ryu Soo-young) asked the defendant. "Did anyone ask you to say what you just said?" The defendant yelled, "I saw him. I told you people. I told you so many times. But all of you drove me to look like a stupid idiot" and "But, only that person, that lawyer believed what I said, He's the only one who believed me". And then he finally broke down in tears.

"[Spoiler] 'Neighborhood Lawyer Jo Deul-ho' Park Shin-yang ignites the beginning of new career as lawyer"
by HanCinema is licensed under a Creative Commons Attribution-Share Alike 3.0 Unported License.
Based on a work from this source