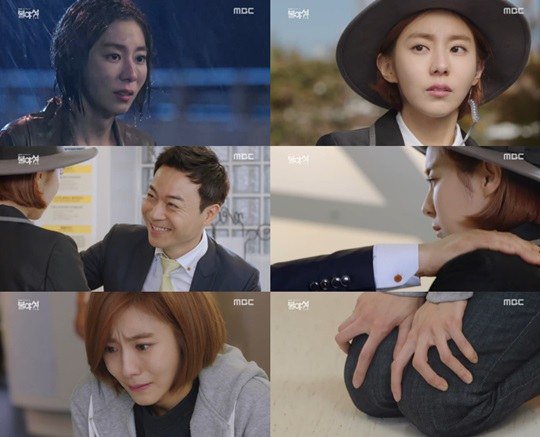 UEE had to suffer from various humiliations for the reason that she's poor.

Seo I-kyeong (Lee Yo-won) asked Lee Se-jin to pretend to be her for one hour in return for payment. It turned out to be a trap. Lee Se-jin was threatened and kidnapped by the Chinese. Se-jin miraculously got out of there but she was a mess.

Seo I-kyeong was impressed and asked Tak (Jung Hae-in) to do a background search on Se-jin. It turned out that Lee Se-jin was in dire need of money and she lived with her aunt. She did everything from department store parking helper and substitute driver day and night.

Lee Se-jin kicked him and left.

This wasn't it for her. During her night job, she ran into Son Ma-ri (Lee Ho-jeong) and drove her home. Son Ma-ri recognized Se-jin who had embarrassed her before and caused a scene.

Lee Se-jin was mad and walked away after getting out of the car. Ma-ri followed her but Se-jin threw Ma-ri down on the ground and she was hurt, getting a scratch on her face and a cracked bone.

Lee Se-jin apologized but Son Ma-ri said, "Your monthly paycheck isn't even half my allowance. If you don't want to pay me, then kneel and I'll forgive you". Lee Se-jin kneeled down although she was so humiliated.

"[Spoiler] "Night Light" UEE's unfortunate and poor life, gets harassed and kneels "
by HanCinema is licensed under a Creative Commons Attribution-Share Alike 3.0 Unported License.
Based on a work from this source