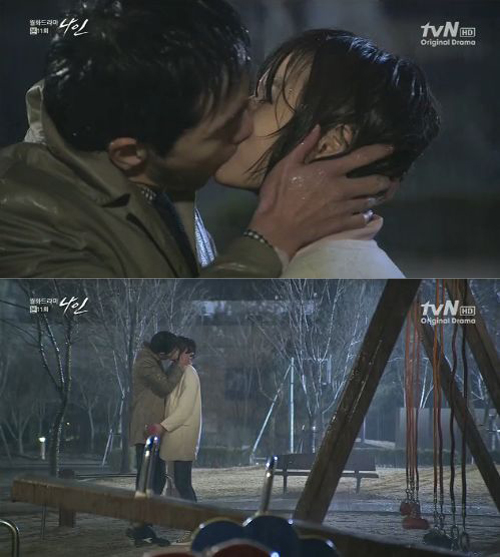 "Nine: Time Travelling Nine Times" Lee Jin-wook kissed Jo Yoon-hee once again in a playground, which he had lots of memories from.

Min-yeong (Jo Yoon-hee) recovered her memory with a record she came across and she disappeared until a late rainy night.

Seon-woo (Lee Jin-wook) was worried sick about her and remembered that they kissed in the playground for the first time. He ran Over There in the rain and there she was.

Min-yeong thought Seon-woo didn't know anything and asked, "Did you know too, Uncle?" Seon-woo replied, "There is something I hate hearing the most, Uncle". He pulled her into a passionate kiss and delivered his feelings.

"[Spoiler] "Nine: Time Travelling Nine Times" Lee Jin-wook kisses Jo Yoon-hee in the rain"
by HanCinema is licensed under a Creative Commons Attribution-Share Alike 3.0 Unported License.
Based on a work from this source