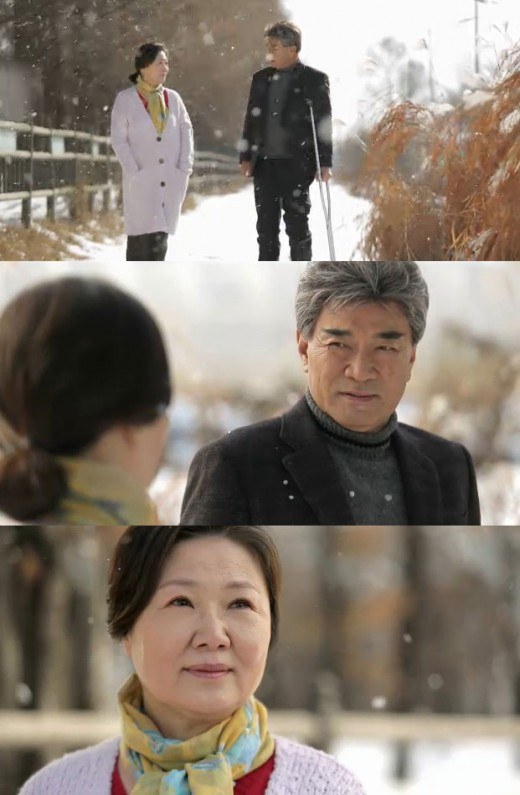 Lee Deok-hwa managed to stand up on his own thanks to his dead wife Kim Hae-sook.

The second part of the Lunar Special Drama, "One Fine Day In October" was broadcasted on the 2nd. This is about a husband who carries out his wife's bucket list at the end of his days.

Lee Sin-jae (Lee Deok-hwa) a stubborn and bad-tempered old man and Kang Yoon-geum (Kim Hae-sook) are the main characters. Yoon-geum dies and Sin-jae tries to commit suicide. His dead wife sent him a letter of her bucket list and he realizes he's not alone as he carries them out one by one.

He realizes around him, there are the people who help him with the apple farming and fans who love him. He approaches the cold relationship which he had with the daughter, who suffered from her brother's death and catches up with his friend of 30 years. He feels the love and memory thanks to his wife.

The final scene was of Sin-jae showing his determination in front of his dead wife. She told him, "We had our sad and happy times but we had a good life. It's going to be tough but I want you to stay alive. I want you to complete the life that we made together".

Sin-jae said, "I will live life to the fullest and make you regret going first". His wife smiled and said, "So can I go now and not worry about you?" Sin-jae managed to stand on his own with her support.

"[Spoiler] "One Fine Day In October" Lee Deok-hwa stands on his own feet"
by HanCinema is licensed under a Creative Commons Attribution-Share Alike 3.0 Unported License.
Based on a work from this source