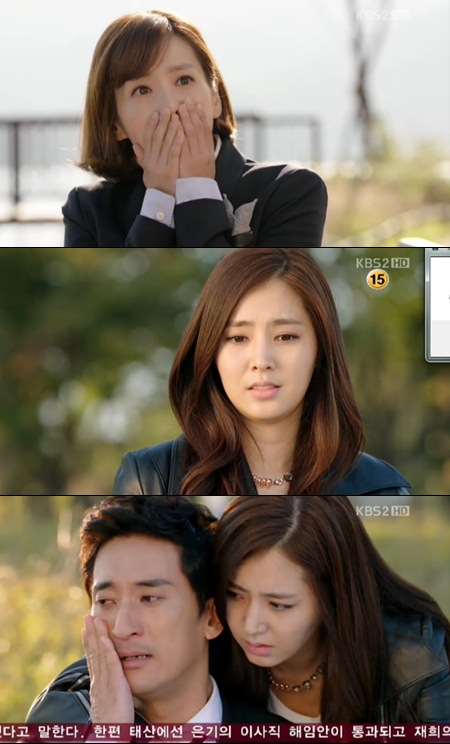 Woman of affair Han Chae-ah had a shocking past.

On the fifth episode of the KBS 2TV drama "Ooh La La Couple" on the 15th, Victoria (Han Chae-ah) told Na Yeong-ok (Kim Jung-eun) in the body of Ko Soo-nam (Shin Hyun-joon) of her past.

Victoria thought of the sudden change in emotions towards her from Soo-nam was the result of memory loss from the accident. She prepared bikes to help him remember what they used to do together.

Yeo-ok was furious at the thought of the two of them riding around the city without her knowing but she couldn't help it as she was in Soo-nam's body. They reached a place with a good view and Victoria confessed, "You're good to me".

She said, "I was adopted to Sweden the moment I was born. I was then alone since 15". She then confessed that her 'father' did something horrible to her. Na Yeong-ok was shocked and started feeling sympathy for the woman she once hated.

Victoria held her from behind and said, "I thank God I met you. I thank God that he gave me someone I can love with my life" and got watery in the eyes. Yeo-ok thought to herself, "He's someone I want to get rid of but he's someone who is loved with all her life. You can have him back when we change bodies. He's done with me".

Meanwhile, the two succeeded in getting in bed together after drinking to change back into their own bodies. However, there was no improvement and they decided to be hy pnotized back to their previous lives.

"[Spoiler] "Ooh La La Couple" Han Chae-ah's unfortunate past"
by HanCinema is licensed under a Creative Commons Attribution-Share Alike 3.0 Unported License.
Based on a work from this source