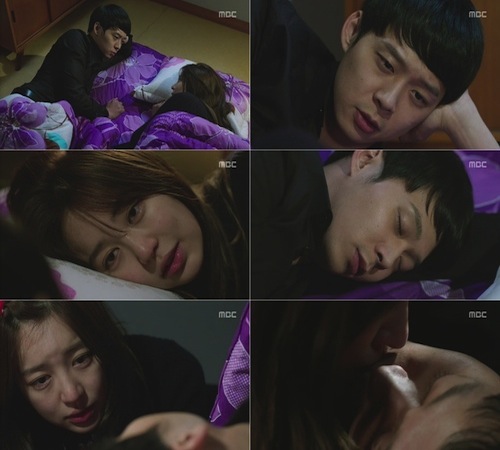 Park Yoo-chun released his animal instincts when he shared a bed with Yoon Eun-hye.

Han Jeong-woo (Park Yoo-chun) and Lee Soo-yeon (Yoon Eun-hye) shared a night together in Kim Myeong-hee's (Song Ok-sook) house. Soo-yeon woke up in the middle of the night and told herself she was crazy as she put her lips to Han Jeong-woo's. Jeong-woo woke up and was very nervous as he walked around the room in circles. He got close to her then laid back down again repeatedly.

Myeong-hee saw this and laughed at how innocent he was as he couldn't do anything about the woman he loved.

The two lay facing each other in one room and spent the time like that. Jeong-woo said, "I will never leave you again. I won't even die alone". Soo-yeon also said, "I believe you will find me wherever I go".

Meanwhile, it turned out Kang Hyeong-joon (Yoo Seung-ho) was taking revenge on Han Tae-joon's (Han Jin-hee) son Han Jeong-woo. Jeong-woo was also surprised to find out that Hyeong-joon was the little boy who was messed up in the unfortunate incident 14 years ago.

"[Spoiler] Park Yoo-chun sleeps with Yoon Eun-hye"
by HanCinema is licensed under a Creative Commons Attribution-Share Alike 3.0 Unported License.
Based on a work from this source