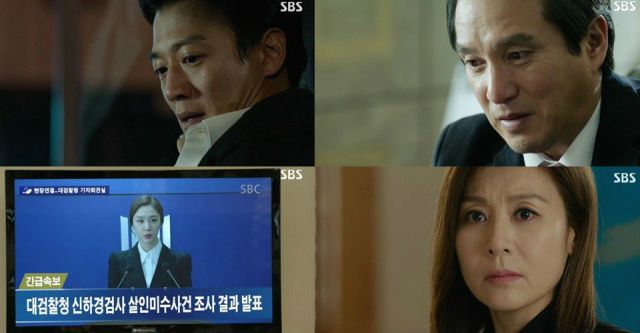 On the last episode of SBS Monday & Tuesday drama, 'Punch - Drama', which aired on February 17th, Park Jeong-hwan (Kim Rae-won) heard Sin Ha-kyeong (Kim Ah-joong) was in fatal condition while he was stuck in an interrogation room.

Lee Ho-seong (On Joo-wan) tried to persuade Park Jeong-hwan by saying, "Tell me where you hid the memory card. Don't you want to see Ha-kyeong before she's gone".

Park Jeong-hwan kept silent despite Lee Ho-seong's suggestion. After Lee Ho-seong left the interrogation room, Park Jeong-hwan took a look at the family photo in his wallet. When he recalled what his doctor had told him, he threw away his last medication. His doctor had informed him that, if he would be shocked again, then it would be almost impossible to resuscitate him. Park Jeong-hwan ended up falling down and he was taken to the hospital finally.

Yoon Ji-sook told Lee Ho-seong, "I confirmed it with hospital. Jeong-hwan would not be able to survive. Get Lee Tae-joon's retirement done today. As soon as he's retired, arrest him. I'll get the order to arrest him". Lee Ho-seong went to Lee Tae-joon and pressed him to retire.

Lee Tae-joon said, "Let the entire world throw rocks to me. You people go ahead and spit on me, I wouldn't leave this room until Jeong-hwan enters this room". Lee Ho-seong said, "Jeong-hwan's taken to hospital. He'll not survive. He'll die soon".

It looked like Lee Tae-joon was accepting the reality and was going to retire when he said, "Where are the reporters. Go and give me a moment".

Lee Tae-joon mumbled, "You kept the promise you'd make me the head of prosecutors' office. And even the promise you will hang on to the wall of the Office of Internal Oversight for 10 minutes. Jeong-hwan, what should I do if you'd just leave like this without keeping your promise this time".

Lee Tae-joon opened the envelope left by Lee Ho-seong in order to take out his retirement statement. In the envelope, there was the memory card proving Yoon Ji-sook's attempted murder.