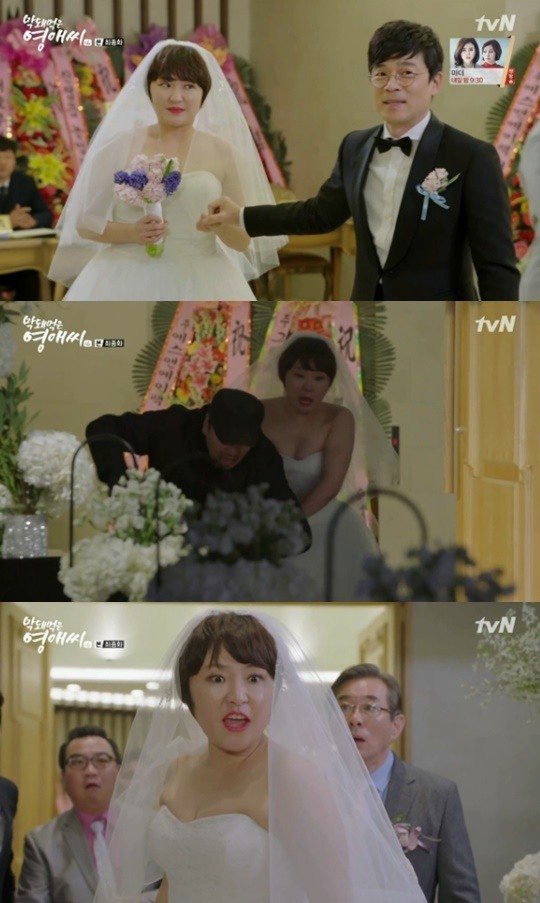 On the final episode of the tvN drama "Rude Miss Young-ae Season 16", Lee Seung-joon and Lee Young-ae (Kim Hyun-sook) registered themselves as married and official became husband and wife.

Lee Young-ae, Ra Mi-ran, and Lee Soo-min complained about being married and worried that each others' husbands would be like the other.

They were eating when Young-ae ran into a work colleague she used to like. She paid for dinner and met him again in her office where he came to ask for help.

Young-ae tried to show off that Lee Seung-joon loved her very much, but was proved futile when he called to ask her to bring something back for him. Her colleague asked her, "Why is he asking a pregnant woman to do that for him?"

She hoped he was proposing, but the colleague was just there for work and Lee Young-ae was very displeased with Lee Seung-joon. She decided to propose to him first and they hugged.

On the day of their wedding, they were almost late but they arrived just in time in a car that said, "Pumpkin Night Club".

Then, the bride didn't enter when it was her turn. It turned out the Lee Young-ae had caught the thief that tried to steal their wedding money and entered the wedding hall yelling for him to be arrested.

"[Spoiler] "Rude Miss Young-ae Season 16" Ends with a Wedding "
by HanCinema is licensed under a Creative Commons Attribution-Share Alike 3.0 Unported License.
Based on a work from this source