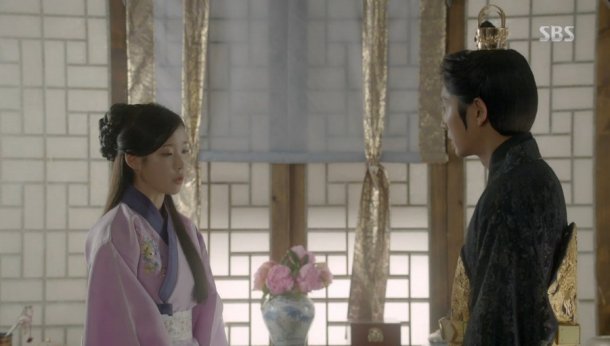 On the episode of the SBS drama "Scarlet Heart: Ryeo" on the 31st, Hae-soo (IU) walked a step away from Gwang Jong. He asked her to follow him to his room but she denied him. She was shocked by Chae-ryeong's (Jin Ki-joo) death and said, "She was true to you". She resented Gwang Jong. She then told him she would like to leave the palace.

Woo He (Seohyun) couldn't overcome her origin. She was stuck between the people of Hubekje and Baek-ah (Nam Joo-hyuk) but in the end she saved Baek-ah and threw herself to death. Baek-ah was devastated and he found out that Gwang Jong was behind her death. He left after saying, "It's hard being next to you. I'm sorry I am not big enough to protect you. I hope you have a long life".

Gwang Jong plotted a conspiracy against Wang Wook (Kang Ha-neul). He killed the quail and smiled as he said, "The crime of betrayal must be treated with death". Hwang-bo Yeon-hwa (Kang Han-na) abandoned Wook for the position of empress. Hae-soo begged Gwang Jong to spare Wook's life. She knew what he was thinking and said, "It's you who killed the quail not Wang wook. You're just doing this to frame him".

Wang Wook told Gwang Jong that Hae-soo and he had promised marriage before and Hae-soo didn't say no. Then she decided to leave the palace by marrying Wang Jeong (Ji Soo).

"[Spoiler] "Scarlet Heart: Ryeo" IU leaves the palace"
by HanCinema is licensed under a Creative Commons Attribution-Share Alike 3.0 Unported License.
Based on a work from this source