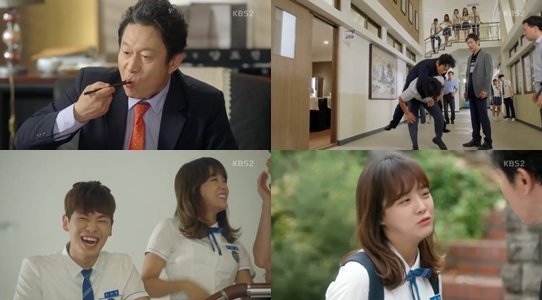 On the latest episode of the KBS 2TV drama "School 2017", Hyeon Tae-woon (Kim Jung-hyun) avenged Ra Eun-ho (Kim Sejeong). He was worried sick about Ra Eun-ho who was ill after getting food poisoning from something she ate at school. He was furious at the school for what happened and said, "I will take revenge on the school for making you sick".

Hyeon Tae-woon sent a lunchbox to Yang Do-jin (Kim Eung-soo) and at the bottom of the lunchbox was a note saying, "I packed this lunch with outdated food just like you". Do-jin began to act as though he has food poisoning, but all the students watched him with smirks on their faces.

Viewers of the drama say that although the drama is titled "School 2017", "Independence Fighter 2017" and "The Japanese Invasion Returns" would have been more suitable titles.

Students who go through school life thinking, "How could a student toy with a principal?" and "How can we get back our rights and deprive the principal of his authority?" is in fact very much like what our independence fighters went through during their times.

Meanwhile, "School 2017" is being criticized for not dealing with real situations found in schools today and instead coming up with situations that are interesting, if not true to life.

"[Spoiler] "School 2017" Kim Kim Jung-hyun delivers lunchbox to Yang Do-jin"
by HanCinema is licensed under a Creative Commons Attribution-Share Alike 3.0 Unported License.
Based on a work from this source