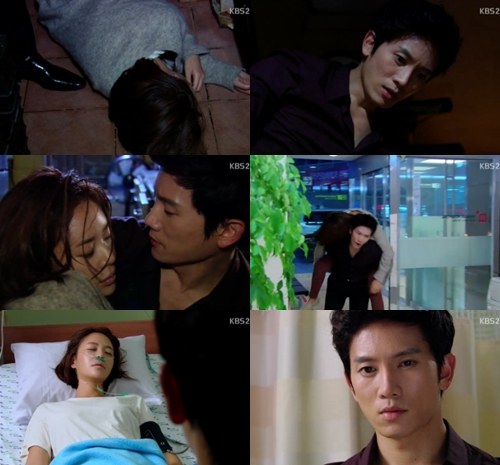 On the sixth episode of the KBS 2TV drama "Secrets", Jo Min-hyeok (Ji Sung) found Kang Yoo-jeong (Hwang Jung-eum) unconscious on the ground and took her to the hospital.

Kang Yoo-jeong cried her heart out when not only her son but father Kang Woo-cheol (Kang Nam-gil) was found dead in Pohang. She lost everything with their death and even chose to say goodbye to Ahn Do-hoon (Bae Soo-bin).

Jo Min-hyeok wondered the whereabouts of Kang Yoo-jeong and sneaked into her house. He found her passed out on the floor and quickly had her taken to the ER.

Jo Min-hyeok had taken her to the hospital when he had always wanted her to live in pain. He repeated to himself, "Don't die. Don't die without my permission".

He had saved her for his revenge, Ahn Do-hoon couldn't bear the prosecutor investigation and quit his job, choosing desire.

"[Spoiler] "Secrets" Ji Sung saves Hwan Jeong-eum"
by HanCinema is licensed under a Creative Commons Attribution-Share Alike 3.0 Unported License.
Based on a work from this source