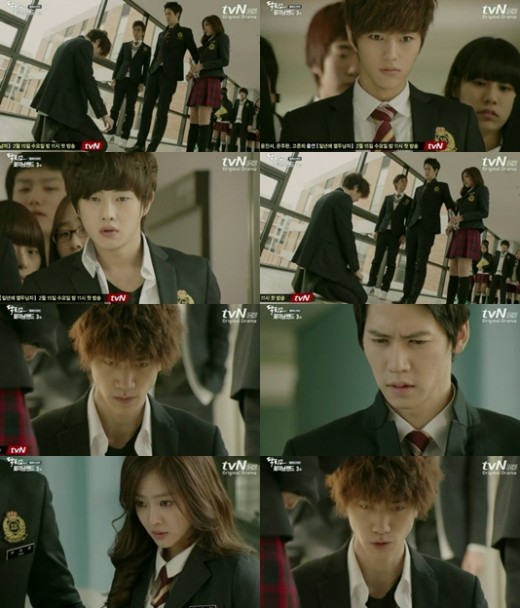 The February 6th episode of cable TV drama "Shut Up: Flower Boy Band" showed the members of 'Purification' -- Lee Hyeon-soo (Kim Myung-soo), Jang Do-il (Lee Hyun-jae), Kim Ha-jin (Yoo Min-kyu) and Seo Kyeong-jong (Kim Min-suk) -- doing all they could to not be expelled so that they could take part in the rock festival, which is a dream of Joo Byeong-hee's (Lee Min-ki).

However, the police had found out that they had avenged Byeong-hee's death on Park Pyo-joo (Kim Hyeon-joon). Everything was covered up, but Pyo-joo told his father about this and 'Purification' was at risk of getting kicked out of school.

Ji-hyeok then approached Seung-hoon, who was standing in the corridor. He said, "Don't say you didn't see what you saw" and knelt in front of him. Seung-hoon stopped when he was about to keep walking by and Ji-hyeok begged him, "Please help us remain in school. Please Yoo Seung-hoon".

The eyes of the 'Purification' members and Im Soo-ah (Jo Bo-ah), as well as those of Seung-hoon and Jeong Ma-ro (Kwak Jeong-ok), all swelled in amazement.

"[Spoiler] "Shut Up: Flower Boy band" Sung Joon kneels in front of Jung Eui-chul for Lee Min-ki"
by HanCinema is licensed under a Creative Commons Attribution-Share Alike 3.0 Unported License.
Based on a work from this source