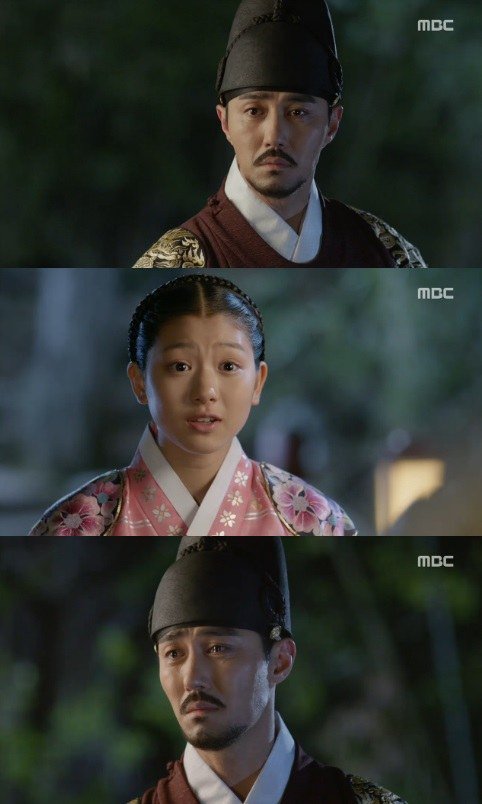 On the third episode of MBC's Monday & Tuesday drama, "Splendid Politics", there was an agitation going on in the palace once princess Jeongmyeong and Grand Prince Yeongchang (Jeon Jin-seo) had disappeared for the day.

As the grand full moon day arrived, princess Jeongmyeong and Grand Prince Yeongchang went to the market to be able to see the people out there. However ministries misunderstood that Gwang Hae had harmed Jeongmyeong and Yeongchang.

As princess Jeongmyeong returned from outside, Gwang Hae could clear up the suspicion from the ministries. And then he went to see her at her place; however Gwang Hae was still hesitant to get into her room. He was just wandering in front of the door.

At that moment, princess Jeongmyeong came out to take a look at how Grand Prince Yeongchang was doing. Princess Jeongmyeong said, "Brother, it's full moon day today. Do you remember? You sold me the heat before. Please buy the heat from me today, Brother". She still showed her affection towards him.

As Gwang Hae recollected the memories about their childhood when he and princess Jeongmyeong had been happy and friendly together, he became all teary.

"[Spoiler] 'Splendid Politics' Gwang Hae displays plaintive feeling towards princess Jeongmyeong "
by HanCinema is licensed under a Creative Commons Attribution-Share Alike 3.0 Unported License.
Based on a work from this source