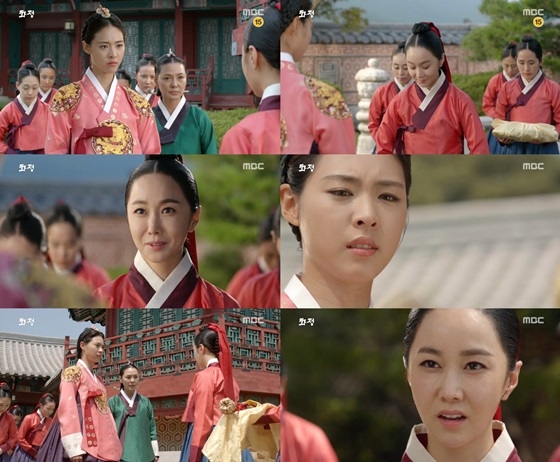 When Jo Yeojeong encountered Jeongmyeong inside palace, she made nasty cynical remarks towards Jeongmyeong, "Where are you headed, Your Highness" and "Are you going to the police bureau? In order to save the lowly servants who were running errands for you?".

At this, Jeongmyeong interrogated Jo Yeojeong, "Lady Jo, how do you know I am headed to the police bureau? I'm asking you a question as an order"

Jo Yeojeong responded with her evil smile, "Since you asked me, I would have to answer, since that's the position I'm in. However things will change from now on".

Jo Yeojeong continued, "We have an evidence you brought this into palace to curse His Majesty (Injo, Kim Jae-won)". She showed a cursed shaman object to Jeongmyeong, while she was falsely accusing the princess.

Jeongmyeong was infuriated, "You falsely accused my innocent people in order to entrap me".

Jo Yeojeong without being taken aback even slightly called in soldiers, while she was saying "Whether you're innocent or not will be revealed soon".

"[Spoiler] 'Splendid Politics' Kim Min-seo entraps Lee Yeon-hee into false accusation of treason"
by HanCinema is licensed under a Creative Commons Attribution-Share Alike 3.0 Unported License.
Based on a work from this source