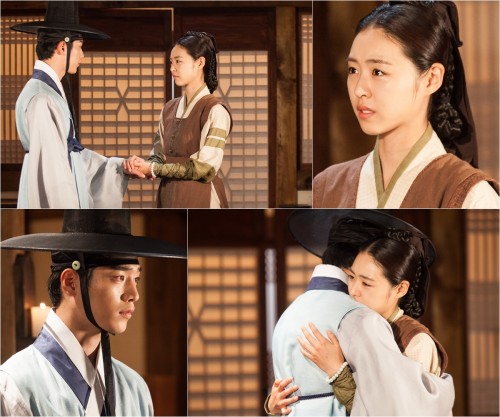 Jeongmyeong chose to stay next to Joo-won (Seo Kang-joon) and Gwanghae (Cha Seung-won) instead of running away for her life under the repeated threats against her.

In the revealed photos, Jeongmyeong and Joo-won are sharing a passionate hug. Jeongmyeong is looking into his eyes ardently while holding his hands. Joo-won also makes unwavering eye contact with her and soon after gives her a tight hug.

The production team of "Splendid Politics" said, "The emotion between Jeongmyeong and Joo-won will ripen even further over time and there will be a huge change in In-woo's mind status. Please look out for the love triangle among Jeongmyeong, Joo-won and In-woo".

"[Spoiler] 'Splendid Politics' Lee Yeon-hee and Seo Kang-joon share passionate hug, love triangle deepens"
by HanCinema is licensed under a Creative Commons Attribution-Share Alike 3.0 Unported License.
Based on a work from this source