Ji Chang-wook and Nam Ji-hyun reunited with a kiss and Dong Ha turned out to be an attacker in a gang rape.

Jeong Hyeon-soo's (Dong Ha) past came out on the latest episode of the SBS drama "Suspicious Partner".

Eun Bong-hee (Nam Ji-hyun) and Bang Gye-jang (Jang Hyuk-jin) started going after Jeong Hyeon-soo's (Dong Ha) past and got closer to the gang rape case. The detective in charge screwed up his face as if he didn't want to remember then and said, "I caught all those bad guys and handed them over to the prosecutors but the case was disposed". Eun Bong-hee asked who the prosecutor of the case was.

It was Jang Moo-yeong (Kim Hong-pa). Eun Bong-hee went to him and asked for an apology. He asked if that would do and she said, "Not for free. I heard you were in charge of one of Jeong Hyeon-soo's cases before? You let the rapists go free. Tell me about that". 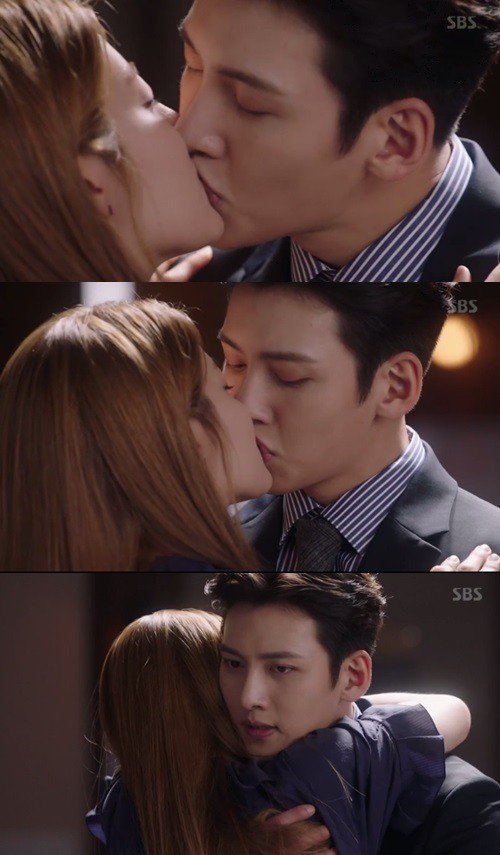 Eun Bong-hee told Noh Ji-wook (Ji Chang-wook) everything. Park So-yeong was the victim of special rape. Eun Bong-hee said, "A few of the rapists had wealthy parents and they tried to cover up their crimes". Not long after, victim Park So-yeong killed herself and the prosecutor in charge was Jang Moo-yeong.

Noh Ji-wook said he was going to book Jang Moo-yeong for rape and shocked everyone. Min Yeong-hoon, the person responsible for Jeong Hyeon-soo's hit-and-run accident witnessed that everyone was in on the plot. Noh Ji-wook misread Park So-yeong's diary intentionally and Jeong Hyeon-soo claimed it was wrong. He retold the rape scene like he remembered it clearly. Noh Ji-wook questioned him about remembering so well and stimulated Jeong Hyeon-soo as one of the rapists.

Jeong Hyeon-soo fell for it and told him where the evidence was. The truth went like this; Jeong Hyeon-soo was in the lowest position of the gang and had a crush on Park So-yeong. However, he participated in the crime against his crush so he distorted his memory in disbelief and became the judge himself, murdering the rest of the attackers.

Meanwhile, Eun Bong-hee and Noh Ji-wook overcame everything and reunited with a kiss.

"[Spoiler] "Suspicious Partner" Nam Ji-hyun and Ji Chang-wook kiss"
by HanCinema is licensed under a Creative Commons Attribution-Share Alike 3.0 Unported License.
Based on a work from this source