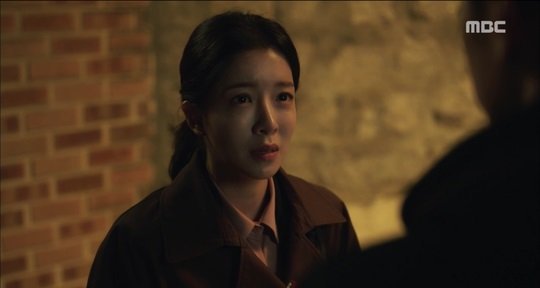 "Terius Behind Me" So Ji-sub pointed a gun at Jung In-sun.

On the latest episode of the MBC drama "Terius Behind Me", Kim Bon (So Ji-sub) pointed a fake gun at Go Ae-rin (Jung In-sun).

Ae-rin snuck into Yoon Choon-sang's residence and took part in King's Baek's plan by interviewing as a housekeeper. Soon she was followed by someone and had a gun pointed at her head.

Ae-rin begged for her life, but the trigger was pulled. However, the gun was fake and it was Kim Bon who had her at gunpoint.

Kim Bon said, "Is this Sangam-dong? What you are doing is this scary? Must you do this when you don't know when a gun will be pointed at you again?"

However, Ae-rin was positive about this and said, "I passed the interview don't worry. Everyone is helping me and you will help me, too. You're always watching over me". Kim Bon said, "If that's how you feel, then I'll make sure to protect you this time".

"[Spoiler] "Terius Behind Me" So Ji-sub Points His Gun at Jung In-sun "
by HanCinema is licensed under a Creative Commons Attribution-Share Alike 3.0 Unported License.
Based on a work from this source