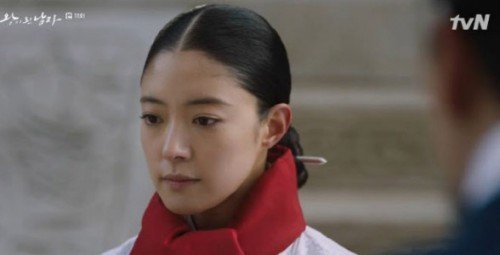 On the latest episode of the tvN drama "The Crowned Clown", Queen So-woon (Lee Se-young) decided to leave the palace after discovering the truth about The King and the Clown.

When she found out that Lee Heon (Yeo Jin-goo) was dead, Ha Seon begged her, "Just tell me to leave. I will leave. Just kill me for I have made a serious mistake".

So-woon had said, "I wish to never see you again, so don't look for me".

Lee Gyoo (Kim Sang-kyung) tried to stop her and said, "Your life will be in danger if you leave like this", but So-woon said, "I can't bear thinking what will happen if I remain in the palace. Do you want that to happen?"

At the end of the episode, Ha Seon was shot by an arrow and So-woon cried for him.

"[Spoiler] "The Crowned Clown" Lee Se-young Attempts to Leave the Palace"
by HanCinema is licensed under a Creative Commons Attribution-Share Alike 3.0 Unported License.
Based on a work from this source