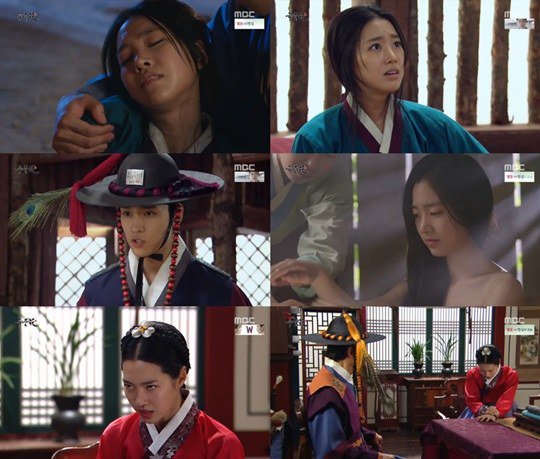 "The Flower in Prison" Jin Se-yeon was on the verge of getting punished for her wits.

Ok-nyeo (Jin Se-yeon) who was stabbed, miraculously survived on the episode of "The Flower in Prison" on the 17th of July.

Seo Ji-heon (Choi Tae-joon) found Ok-nyeo unconscious and took her to the doctors.

He was ordered to let the Ministry of Justice and the Royal Secretariat know about Ok-nyeo who became conscious again.

Ok-nyeo said, "I was attacked on my way here. Everyone else died and I was captured here alive. The pirates wanted to sell me off as a Ming Dynasty slave and I made my escape when I saw the chance. Is it going to be a problem for you for saving me?" Seong Ji-heon answered, "No, don't worry about it. It's not your fault".

Seong Ji-heon continued, "They told me to let them know you're alive, but I won't notify them of anything. Hanyang thinks you're dead, so let's find a way to get you out of here".

"If you become a maidservant for the government, do you know you have to wait on someone? No, if you did you wouldn't have come here. You should think about how you can avoid becoming a maidservant".

However, Ok-nyeo became the servant of Lord Hopan. She suggested an excellent plan to Seong Ji-heon. She said, "My Lord, I was born and raised in prison. I have learned how to read faces since I was young. If you help me find out about the observer and the grown-ups as I will, it'll work".

Ok-nyeo was preparing to wait on Lord Hopan when she suddenly pretended to be possessed. She lied that she was cursed by a shaman in Hanyang and started repeating the observer's secrets.

Meanwhile, Myeong Jong (Seo Ha-joon) started a search for Ok-nyeo as he wouldn't believe that she was dead. However, Seong Ji-heon told him she was dead.

"[Spoiler] "The Flower in Prison" Jin Se-yeon's inspiring act of being possessed"
by HanCinema is licensed under a Creative Commons Attribution-Share Alike 3.0 Unported License.
Based on a work from this source