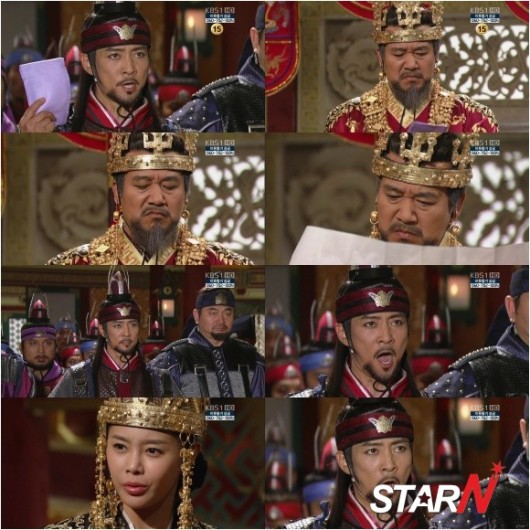 He told the King, "I disagree in crowning the princess. The moment that happens, I think the Palace Danghang and the north of the Woongjin will be handed over. I stand here to fulfill my duties to Hwarang-do".

When the King asked, "What does the crowning of the princess have anything to do with the Bekjae?" Kim explained, "The reason God spoke about is in here" handing the King a letter and continued, "This is a letter to the king of Bekjae the Queen".

Calmly explaining, Kim Chun-chu said, "The Queen promised the prince to hand over Danghang Palace and the north land and got rid of the Naje Treaty to get rid of the work the Princess (Hong Eun-hee) accomplished at the Palace of Nangbi".

Kim didn't even flinch when the Queen threatened him for speaking ill of the prince and Queen but asked, "How are you trying to cover up the skies with your hands? If the God was speaking a lie then the whole of Hwarang-do will pay for its sins".

Meanwhile, Bi Hyeong-rang (Jang Dong-jik) delivered something to prove the Queen's innocence to turn over the loyal palace but it turned out to be fake.

"[Spoiler] "The Great King's Dream" Choi Soo-jong tells Kim Ha-kyoon Lee Young-ah's plan"
by HanCinema is licensed under a Creative Commons Attribution-Share Alike 3.0 Unported License.
Based on a work from this source