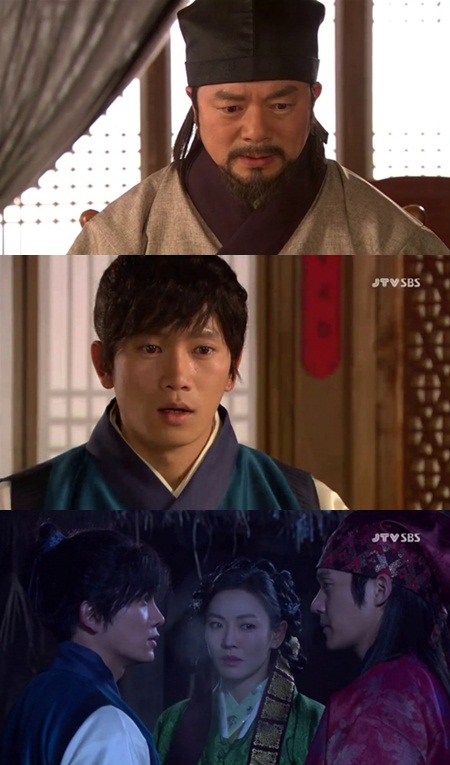 On the twentieth episode of the SBS drama "The Great Seer", Mok Ji-sang (Ji Sung) didn't show up for his own wedding with Yoon Hae-in (Kim So-yeon) when he found out that he future father-in-law Yoon Hyo-myeong (Lee Young-bum) was his father Mok Dong-ryun's (Choi Jae-woong) killer.

Mok Ji-sang was going to get married to Yoon Hae-in. Yoon ran out of the house when her father didn't give her permission and started preparing for marriage. On the day of the wedding, Mok Ji-sang visited his future father-in-law and said he was going to marry his daughter.

He said, "Please tell me if there is anything you don't like of me. I will improve on it and become the son-in-law you want". Yoon Hyo-myeong answered, "It's not you why I am against this marriage. It's me".

He showed Mok a bow and arrow and said, "I killed someone with this a long time ago. That person is you father". Mok Ji-sang was greatly shocked and idn't want to believe it but Yoon said, "Your father fell when he was hit by the arrow I shot".

Mok Ji-sang said, "But you were close. Why did you do that?" but Yoon only said, "Will you be able to forgive me if I gave you an excuse? Hae-in is the daughter of the enemy that killed your father".

Mok Ji-sang didn't turn up at his wedding and showed up later in front of Yoon Hae-in and rival Lee Jeong-geun (Song Chang-eui) in despair.

"[Spoiler] "The Great Seer" Ji Sung is shocked at the truth of his father's death"
by HanCinema is licensed under a Creative Commons Attribution-Share Alike 3.0 Unported License.
Based on a work from this source