[Spoiler] "The Great Seer", what if Kim So-yeon was somewhere with plenty of yin energy? 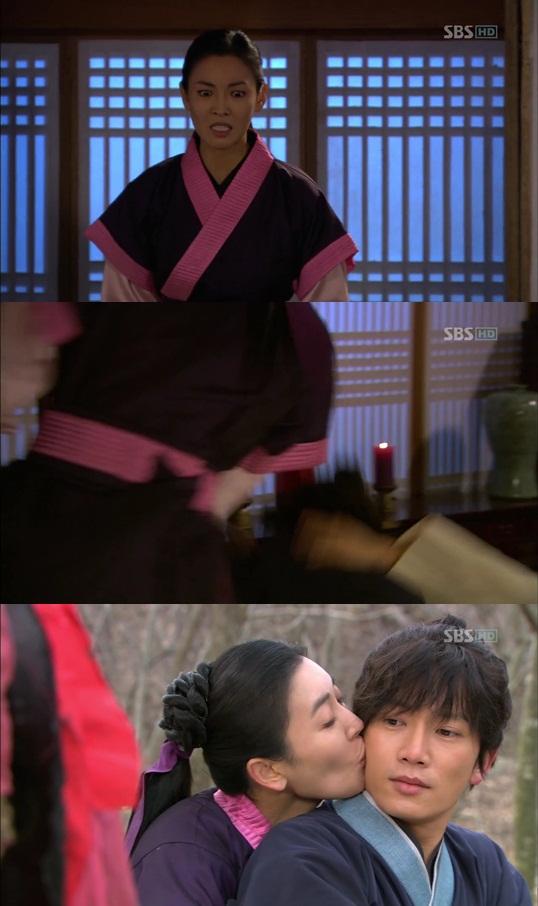 The seventeenth episode of the SBS drama "The Great Seer" showed Mok Ji-sang (Ji Sung) and Hae-in (Kim So-yeon) in contrast in a village where all the men were dying out due to the strong Yin energy.

Ji-sang almost slept with a woman he didn't know under the force of the village's widows. This widow who remained faithful after her husband died, ran at him to carry on the family line and Hae-in witnessed the two in each others arms.

Hae-in stomped close and punched Ji-sang, accusing him of molesting a faithful widow and even pushed him down.

When the two were investigating a secret of the village, Hae-in seemed energized and very strong. She even hugged Ji-sang who was shaking from the overpowering air of Yin and kissed him on the cheek.

Hae-in seemed to be very bold and eager in the village full of yin's. The Hae-in who was at loss when Ji-sang ridiculed her in the previous episode was nowhere to be seen.

Meanwhile, Ji-sang and Hae-in, Lee Seong-gye and other important characters gathered in one place and Lee In-im also surfaced ambitions.

"[Spoiler] "The Great Seer", what if Kim So-yeon was somewhere with plenty of yin energy?"
by HanCinema is licensed under a Creative Commons Attribution-Share Alike 3.0 Unported License.
Based on a work from this source