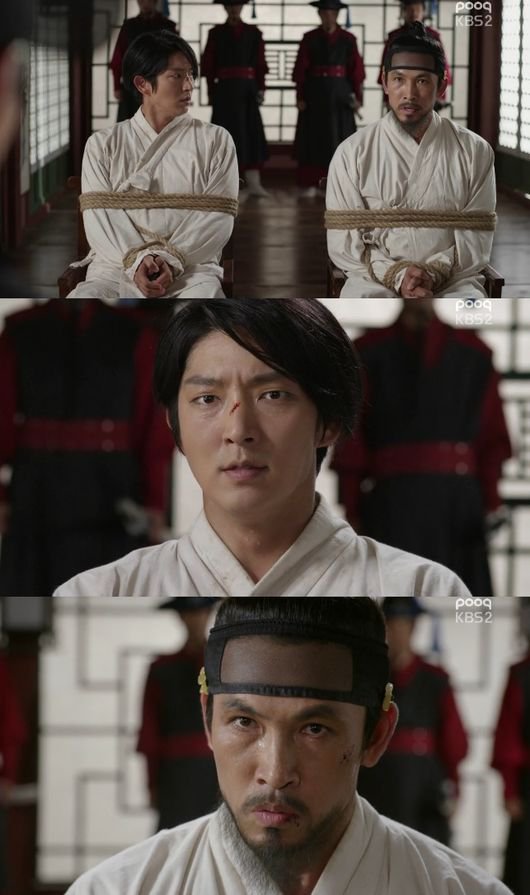 On the thirteenth episode of the KBS 2TV drama "The Joseon Shooter", Won-sin (Yoo Oh-sung) refused to reveal his crime and provoked Yoon-kang (Lee Joon-gi) until the end.

Yoon-kang stated that he was hit by Choi Won-sin's gun and that he was the son of Park Jin-han (Choi Jae-sung). Yoon-kang then said, "He is under the orders of Kam Jwa-yeong. He confessed to me".

However, Won-sin said, "He is lying. I don't know who Kam Jwa-yeong is".

Min Yeong-ik (Oh Min-suk) claimed, "His daughter claims to have seen everything" and mentioned Hye-won (Jeon Hye-bin). Won-sin was surprised by this move and said, "I don't want to see my child harmed. I don't know what I will say". Min Yeong-ik had once been bribed by Won-in in the past.

Kim Ho-kyeong (Han Joo-wan) said, "This woman is the only witness. She must testify".

As a result of this statement, Won-sin became angry.

"[Spoiler] "The Joseon Shooter" Lee Joon-gi vs. Yoo Oh-sung"
by HanCinema is licensed under a Creative Commons Attribution-Share Alike 3.0 Unported License.
Based on a work from this source