[Spoiler] "The Legend of the Blue Sea" Jun Ji-hyun and Lee Min-ho's destiny, "My heart remembers" 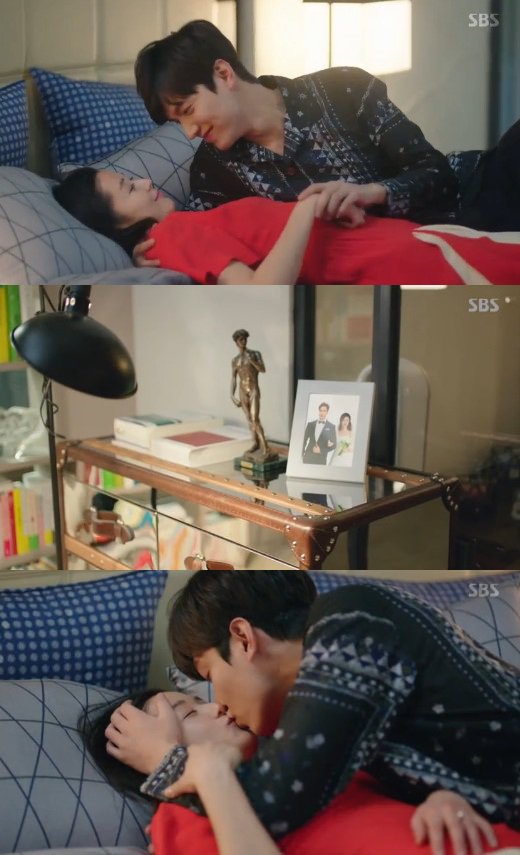 The love that the heart remembers ended happily.

On the final episode of the SBS drama "The Legend of the Blue Sea", Sim Cheong (Jun Ji-hyun) kissed Heo Joon-jae (Lee Min-ho) who said, "It's up to you whether you erase my memory or not. She then said goodbye to Jo Nam-doo (Lee Hee-joon) and Tae-oh (Sin Won-ho) saying, "I have to go away for a while. Thank you everyone".

She then went to Cha Sia's (Shin Hye-sun) house to say goodbye and put out her hand to them. She also tried to erase Yuna's (Shin Rin-ah) memory but Yuna recognized her and said, "I saw you in my dreams. I could talk to you in my dreams".

Joon-jae studied for 3 years and became a prosecutor. He had told Cheong in the past that he was a public worker. While drinking with Nam-du, Tae-oh and Hong Dong-pyo (Park Hae-soo), he started crying saying, "I miss her". Nam-du was confused and said, "He cries every time he is drunk". At the same time, Cheong was crying too and her tears fell as pearls. Joon-jae spent day and night looking out to sea.

Cheong returned. She met a passing mermaid and gave her tips on how to survive on land. She then claimed, "I suffered from a gunshot". She headed to Joon-jae's house. Nam-du didn't recognize Cheong and Joon-jae asked who she was. Mo Yoo-ran (Na Young-hee) let her in. Joon-jae asked, "Who are you?" and Cheong said, "I am the person you loved more than the time you had". She then said, "I love you" three times. Joon-jae's face was unreadable.

Joon-jae then found Cheong sitting on the streets and pulled her into his arms, saying, "Only I Remember You in this world. My body and heart remembered you so nothing would've worked on me. I was so scared that I would forget you as time went by. I tried not to forget you". Joon-jae had recorded his thoughts about Cheong and had always missed her. He got a house to live with her and they got married, happily.

"[Spoiler] "The Legend of the Blue Sea" Jun Ji-hyun and Lee Min-ho's destiny, "My heart remembers""
by HanCinema is licensed under a Creative Commons Attribution-Share Alike 3.0 Unported License.
Based on a work from this source