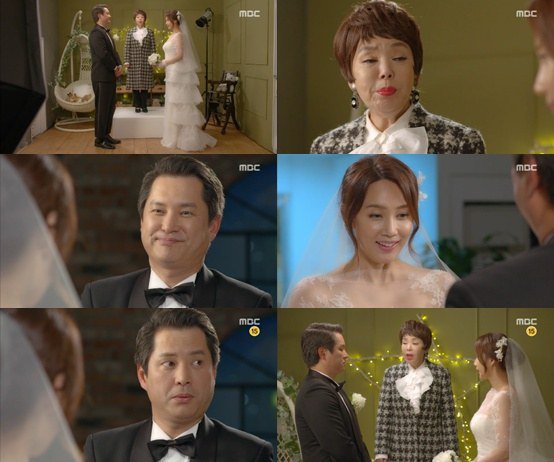 Lee Jong-won and Oh Hyun-kyung were married by Kim Soo-mi.

Tak Wol-han (Lee Jong-won) and Son Poong-geum (Oh Hyun-kyung) went to get their pictures taken in the weekend episode of MBC drama "The Legendary Witch".

The two of them decided to skip the wedding and instead just take wedding pictures to save money.

Kim Young-ok (Kim Soo-mi) appeared out of nowhere and stopped them from getting pictures taken.

She'd heard that the couple weren't having a wedding due to financial issues and decided to marry them herself.

She started the wedding by asking Tak Wol-han, "Do you take Son Poong-geum to be your lawfully wedded wife and love her and cherish her forever?"

"[Spoiler] "The Legendary Witch" Lee Jong-won and Oh Hyun-kyung get married"
by HanCinema is licensed under a Creative Commons Attribution-Share Alike 3.0 Unported License.
Based on a work from this source