[Spoiler] "The Perfect Wife", the affair was just a tool 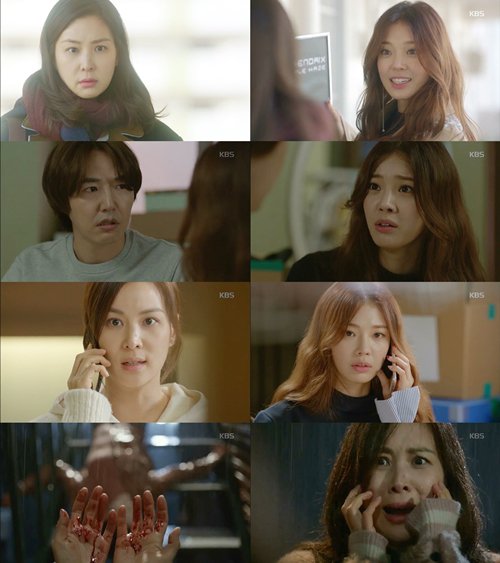 "The Perfect Wife" added mystery to its story. Sim Jae-bok (Ko So-young) found the body of Jeong Na-mi (Im Se-mi) who her husband Koo Jeong-hee (Yoon Sang-hyun) had an affair with. The affair was just a tool to show how unfortunate Jae-bok was.

Na-mi suddenly appeared in front of Jae-bok and broke up with Jeong-hee and she even quit her job. She tried to tell Jae-bok something she couldn't say before but Choi Deok-boon (Nam Gi-ae) threatened her not to. She disappeared without a trace.

Jeong-hee begged Jae-bok on his hands and knees. However, he couldn't forget about Nami. On his way home on the bus, he saw Nami and got off the bus to hug her from behind. He said, "I only live once and I don't want to live without you". Nami also said, "Let's run away together where no one can find us".

However, Jae-bok sensed that Jeong-hee and Nami were seeing each other again when Lee Eun-hee (Cho Yeo-jeong) said Jeong-hee smelled like lavenders. She called Nami out and Nami told her, "We are going to run away together. Please divorce him".

Jae-bok was furious but she told herself to calm down and told herself she wouldn't abandon Jeong-hee. Jae-bok arrived at Nami's house but all that she saw was Nami laying upside down on the stairs, dead. The scene where Jae-bok screamed with blood on her hands was explained here on the fourth episode.

Jae-bok is now about to be called out as Nami's killer. Poor Jae-bok with no money and no luck is going to have her life turned upside down by finding Nami dead.

"[Spoiler] "The Perfect Wife", the affair was just a tool "
by HanCinema is licensed under a Creative Commons Attribution-Share Alike 3.0 Unported License.
Based on a work from this source