[Spoiler] "The Queen's Flower" Lee Jong-hyuk tells Kim Sung-ryung, "I realized that I can love again"

On the sixteenth episode of the MBC weekend drama "The Queen's Flower", Min-joon entered Rena's apartment because of the pretence she put on that a stalker was bothering her.

Rena made sure Min-joon wasn't leaving and said, "I'm really sorry about what happened at the hotel. You might just have been being nice to me, but I misunderstood that".

She continued, "Actually, when I was in the States, I had a superior who was really nice to me but it was all a show. You think too much of your wife so I know you're just being nice to me because I look pitiful".

Min-joon said, "I am not being nice to you because of that. Do you know what I wanted to say to you when we were in Shanghai?" She answered, "You said you'd tell me all about you".

Min-joon said, "I met a woman in New York 10 years ago. I was exhausted from the long term abroad and I fell for her. I decided to marry her three months after I met her despite my family's opposition". Rena asked if that was his wife.

He said, "She didn't show up at the wedding. I just pretended to be married as to not disgrace my family. That's what I wanted to tell you".

Rena asked why and he said, "I had forgotten for 10 years that I could love again. You can forget what I said if you think it's too much".

Rena said, "No, I've always liked you too but I thought you had a family so I didn't dare...how could I?" and fell into his arms. 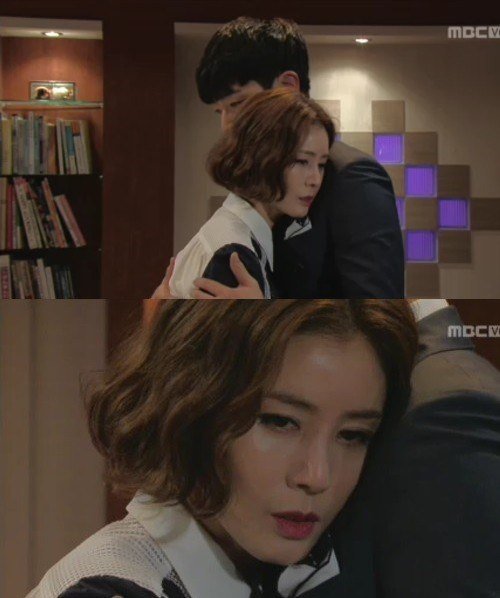 "[Spoiler] "The Queen's Flower" Lee Jong-hyuk tells Kim Sung-ryung, "I realized that I can love again""
by HanCinema is licensed under a Creative Commons Attribution-Share Alike 3.0 Unported License.
Based on a work from this source