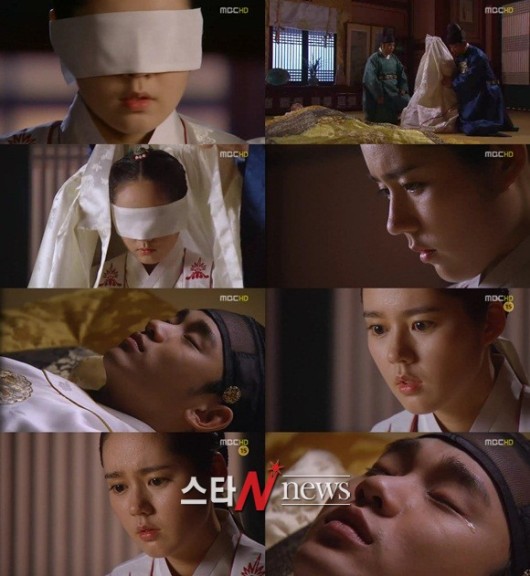 On the latest episode of MBC drama "The Sun and the Moon", aired on January 26th, Heo Yeon-woo (Han Ga-in) became a magnet for bad luck and reunited with Lee Hwon (Kim Soo-hyun) as his human charm.

Heo Yeon-woo was taken as a hostage instead of her mother and became a human good luck charm that chases away demons and disasters from others.

Yeon-woo was purified with a bath and taken to Lee Hwon in clean clothes with her eyes covered up. There was much tense emotion in this scene as it was the first time Hwon and Yeon-woo reunited.

Yeon-woo couldn't help but smile at Hwon sleeping, touching his face while Hwon, who felt it, reminisced about their time together as children.

Han Ga-in's bath of purification, in her own tears, stole all the attention in this episode.

"[Spoiler] "The Sun and the Moon" Han Ga-in reunites with Kim Soo-hyun as protector"
by HanCinema is licensed under a Creative Commons Attribution-Share Alike 3.0 Unported License.
Based on a work from this source