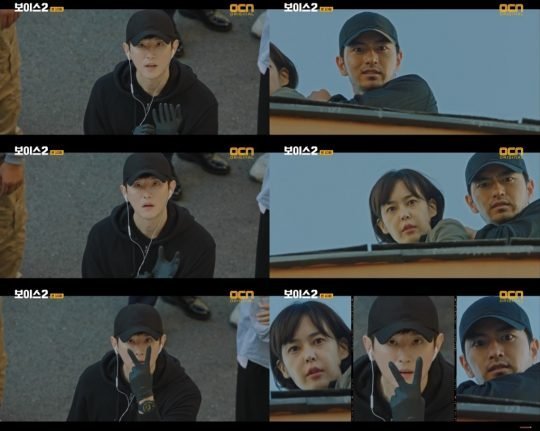 On the latest episode of the OCN drama "Voice 2", Do Kang-woo (Lee Jin-wook) held Kim Kwon-joo (Lee Ha-na) hostage in order to catch the criminal.

Kang Kwon-joo learned that Do Kang-woo was in the suspect's trap and that the suspect had eyes on police movement because he had bugged their radios. Do Kang-woo told Kang Kwon-joo to focus on the sound to lead her to the criminal and pretended to hold her hostage.

Bang Je-soo (Kwon Yool) enjoyed watching Do Kang-woo go crazy, but seemed shocked to know that the police had accessed Doctor Fabro. When he found out Do Kang-woo was behind this, he said, "So Do Kang-woo used his head. But I'm not having fun either".

He took out latex gloves from his pocket and Kang Kwon-joo heard this. She told Do Kang-woo the criminal was amongst the old women at their 9 o'clock. Do Kang-woo and Bang Je-soo met eyes and Bang Je-soo said, "Nice to see you. I'll take you to play for real now" and made scissor-gestures with his fingers.

"[Spoiler] "Voice 2" Kwon Yool and Lee Jin-wook Try to Outsmart Each Other"
by HanCinema is licensed under a Creative Commons Attribution-Share Alike 3.0 Unported License.
Based on a work from this source