[Spoiler] "While You Were Sleeping - 2017" Lee Jong-suk, Suzy, and Jung Hae-in work together to change dream 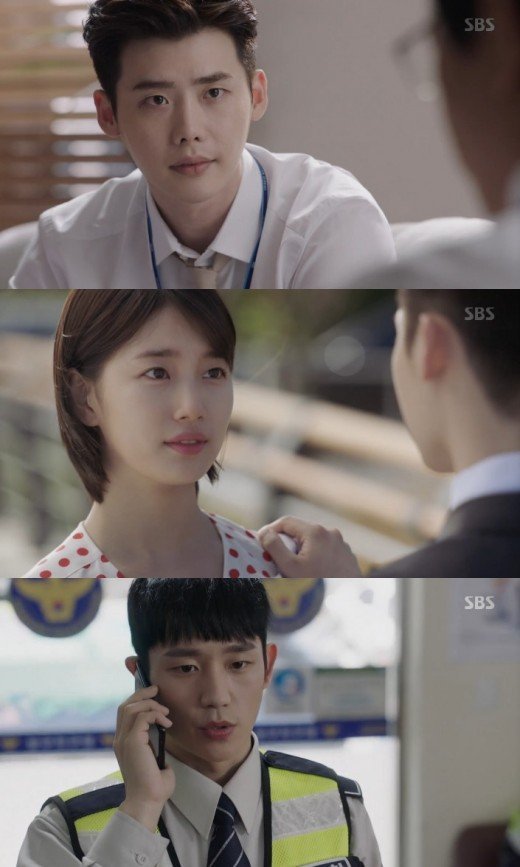 Nam Hong-joo (Suzy) and Han Woo-tak (Jung Hae-in) had a bad premonition on the latest episode of the SBS drama "While You Were Sleeping - 2017".

In her dream, Nam Hong-joo went out for inspection as soon as Jeong Jae-chan (Lee Jong-suk) returned and met her teaching assistant who had died of a head injury. Jeong Jae-chan dreamed that he knew this wasn't an accident and went into autopsy. Because of this, seven patients who were to get organ donations died. In the end, Jeong Jae-chan quit his job as a prosecutor because of guilt.

Han Woo-tak had a dream about this, too. In his dream, Jeong Jae-chan was in court and quit being a prosecutor.

Jeong Jae-chan was worried as he had an inspection as soon as he returned to his job. According to Nam Hong-joo's advice, he decided to go ahead with the transplant and the autopsy at the same time. Han Woo-tak kept an eye on Moon Tae-min.

However, the case wasn't easy because the opposing lawyer was Lee Yoo-beom (Lee Sang-yeob). He was Moon Tae-min's attorney. Moon Tae-min tried to cover up the fact that he killed the teaching assistant by strangling him.

"[Spoiler] "While You Were Sleeping - 2017" Lee Jong-suk, Suzy, and Jung Hae-in work together to change dream "
by HanCinema is licensed under a Creative Commons Attribution-Share Alike 3.0 Unported License.
Based on a work from this source